Book Review — Facing the Abyss: American Literature and Culture in the 1940s 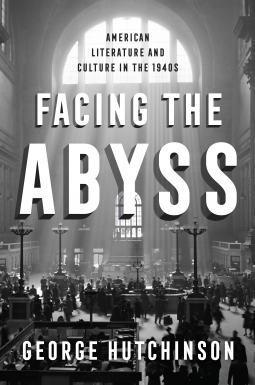 Facing the Abyss: American Literature and Culture in the 1940s by George Hutchinson is the discussion of American literature in the 1940s. Hutchinson is an American scholar, Professor of English and Newton C. Farr Professor of American Culture at Cornell University. He is also Director of the John S. Knight Institute for Writing in the Disciplines at Cornell. From 2000 to 2012, he was the Booth Tarkington Professor of Literary Studies, at Indiana University, where he chaired the English department from 2006-2009.He graduated from Brown University with an AB in 1975. He graduated from Indiana University with an MA in 1980, and Ph.D. in English and American Studies, in 1983

American literature was booming after the Great War. Hemingway, Fitzgerald, and Faulkner flourished in the interwar years. American was becoming an advanced nation. Education was rising and mass marketed paperback books made reading cheap. It’s pretty easy to identify interwar authors in America and well as the Beat authors that rose in the 1950s. What happened in the 1940s is a blank to many. Certainly, World War II changed many things. WWI brought out poets in England. Americans went to the Left Bank and to England to write. There was a pride in American literature and America’s rising on the world stage in power, industry, and literature.

America faced large changes in the 1940s. Warren French would write that the 1940s were “one of the longest, unloveliest, and most ominously significant decades in human history.” It was sandwiched between Hitler’s invasion of Poland and North Korea’s invasion of South Korea and punctuated with the atomic bomb. In that same period Arthur Miller, Truman Capote, Richard Wright, and Gwendolyn Brooks all produced major works. Three Americans won the Nobel prize for literature in the 1930s. War would interrupt the 1940s but still Faulkner an Eliot would win Nobels. The 1940s were also the golden age of American libraries. They offered free shelter, entertainment, and education to all.

The army spread books among the ranks. There wasn’t an area of combat where soldiers were not reading. Not all authors were read. Richard Wright was not included and other African American writers were left out as well as those writers whose works were considered insulting to racial, ethnic, or religious groups. Zane Grey’s Riders of the Purple Sage was excluded because of its negative portrayal of Mormons. Reading was a necessary escape for those in combat. Many read their first books straight through while serving. This sudden interest in reading also lead to an interest in writing. The G.I. Bill allowed many to attend college and many took to writing and instead of writing to change the world the new authors thought to write about the attempting to make sense of the incomprehensible.

The rise of cheap paperbacks also brought along another form of media. The comic book entered its golden age. Superman and Batman became heroes fighting the bad guys. The bad guys in Batman were complex — Once innocent people transformed into supersociopaths through childhood trauma or social inequity. Even Two-Face was based on a Poe short story.

The 1940s was influenced by many factors outside of the war. Racial issues especially African American and Jewish were on the rise. The mass migration of African Americans to northern industrial centers was perhaps the largest migration of people over the shortest period of time in American history. Jazz changed music. Communism rose and fell; its peak membership in the US was in 1942. The world was changing and the United States found itself as the leading country, politically, economically, and militarily. It had its own internal problems and its growing pains. This can be seen in the literature of the period. Hutchinson writes an interesting cultural and literary history of one of the most important decades in American history.

2 responses to “Book Review — Facing the Abyss: American Literature and Culture in the 1940s”