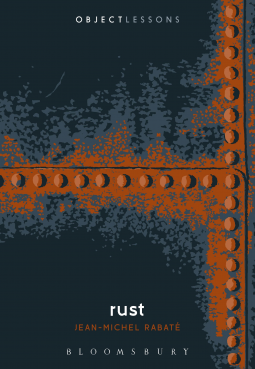 Rust by Jean-Michel Rabaté is another addition to the growing Object Lesson series from Bloomsbury Academic.  Rabaté is one of the world’s foremost literary theorists. He is Professor of English and Comparative Literature and the Vartan Gregorian Professor in the Humanities at the University of Pennsylvania. Rabaté has authored or edited more than thirty books on modernism, psychoanalysis, contemporary art, philosophy, and writers like Beckett, Pound, and Joyce.

For anyone that lives in the former industrial north, rust is simply a fact of life.  Car bodies rust through with the help of winter salting.  Rust stains concrete and leaves it mark on steel structures.  Rust is the oxidation of iron in specific but Rabaté takes it to a deeper level.  The Eiffel Tower gets painted regularly to prevent rust.  Rabaté sees more rust in America than in Europe and Japan, equally industrialized areas.  Others go through the trouble to hide rust that Americans do not.  Rust even caused the collapse of Mianus River Bridge in Connecticut in 1983.

Rust takes on other manifestations. It is a plant disease.  Ceylon, now Sri Lanka, was once a coffee producing region until a rust killed off all the coffee trees.  That change Ceylon from a coffee producing nation to a tea growing nation.  I benefit I personally enjoy.  Being a primarily a literature professor, and a professor of modernist literature he includes a book by J.M. Coetzee the Life and Times of Michael K.  Here is where modernism describes rust and rustication.  A very interesting and appreciated twist.  He even includes a review of a Japanese Movie entitled Rust.  Hegel and Kafka are even brought into the lesson.

This is perhaps the most free-ranging lesson in the series.  It takes a bit of modernism and stream of consciousness to give the broad range explanation of the subject.  It is not a straightforward chemical process but covers how deeply the word has entered of vocabulary and mindset.  Rust is a disease. It is a color.  Its color describes other objects. It is in the Bible and the Koran.  Rabaté gives a comprehensive and cultural look at the idea of rust more than the chemical reactions.