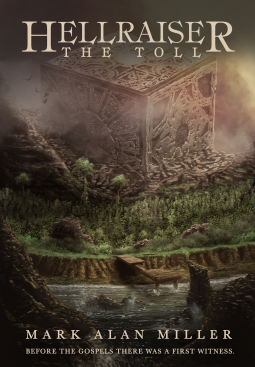 Hellraiser: The Toll by Mark Alan Miller based on Clive Barker’s work is a continuation of the Hellraiser collection. Miller is the Vice President of Seraphim, Inc., Clive Barker’s production company. Miller is also a comic book writer, having written for Boom! Studios and Dark Horse.

By far the best horror series I have seen is Hellraiser. The characters and the storyline were much better than the slasher movies that preceded it. Nine movie releases, although a few went straight to video has kept Pinhead alive in many people’s minds. This novella falls between two other Hellraiser stories, that I have not read, but Kristy and Pinhead both play a part in the story.

This novella starts with the story of a French toy maker Philip Lemarchand who was famous in the 18th century for his singing birds and puzzle boxes. Much like others when they became too good at something, he was accused of conspiring with the devil and sentenced to Devil’s Island. He, too, of course, was the creator of the Lemarchand puzzle box. Modern times bring in Kristy who is in hiding and a mysterious message from an outside source. The story begins here with a tie-in to both Kristy and Devil’s Island.

This episode reads much like a graphic novel, which should be no surprise considering the author’s other writing. The book reads quickly and is enjoyable to those who enjoy horror. The Toll provides a short but well-written return to the land of the Cenobites and pain. Although I usually don’t read horror novels, I couldn’t resist picking up a Hellraiser novella.