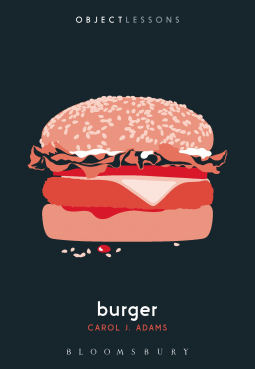 Burger by Carol J. Adams is a look at perhaps the most American sandwich. Adams is a feminist-vegan advocate, activist, and independent scholar and the author of numerous books including her pathbreaking The Sexual Politics of Meat: A Feminist-Vegetarian Critical Theory, now in a Bloomsbury Revelations edition celebrating its 25th anniversary. She is the co-editor of several important anthologies, including most recently Ecofeminism: Feminist Intersections with Other Animals and the Earth (with Lori Gruen). The Carol J. Adams Reader: Writings and Conversations 1995-2015 appeared in the fall of 2016.

I didn’t know anything about the author when I picked up this book and myself, a vegetarian, questioned why I picked it up.  Hamburgers are ground beef and something that I no longer eat, but there is something about a burger that goes back to childhood cookouts, Fourth of July barbeques, and that feeling of, for lack of a better word, America.  I have tried the many veggie burgers out there and they have gotten much better over the years, but there is something about the ideal of  burger that is missing.  It’s much like when a meat eater grabs a turkey burger bites in and something just isn’t quite the same.

I am old enough to remember the days of a neighborhood butcher shop with a side of beef in the back and the butchers cutting meat for customers.  Adams also mentions that older people never cared for prepackaged ground beef.  One was expected to pick a piece chuck or sirloin and asked to have it ground.  I recall the same experience in the 1980s in Western Europe.  There may not have been a real reason for that back then, but today in the age of pink slime and industrial scale slaughterhouses your beef burger can have the DNA of 1,000 different cows.  That piece of beef that used to make your burger now comes from countless pieces.

Adams covers the history of the burger as well as paying tribute to its place in America from the hamburger stand to McDonald’s to LBJ’s special burger.  Of course, there are the aspects of industrial-scale slaughter, waste holding ponds, and methane production. Alternatives are also covered as well as a history of veggie burgers and now companies involved in animal product sales are interested in them.  Tyson now owns 5% of Beyond Meat, a pea protein-based vegan meat substitute.

Bloomsbury Academic releases this series “Object Lessons” on common items and their secret lives and histories.  Common items have more of a story to them one usually expects.  Burger is an excellent addition to a well-written series.