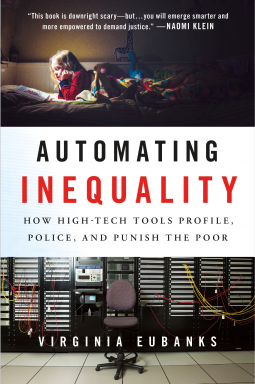 Automating Inequality: How High-Tech Tools Profile, Police, and Punish the Poor by Virginia Eubanks is a report on the use of technology in determining government assistance programs. Eubanks is the co-founder of Our Knowledge, Our Power (OKOP), a grassroots anti-poverty and welfare rights organization, and is Associate Professor in the Department of Women’s Studies at the University at Albany, SUNY.

Public assistance programs are seen as a drag on the economy to many people.  People work hard for their money don’t want to see their tax dollars abused.  Reagan exaggerated stories of welfare queens.  The 1970s were filled with images of Caddilac’s parked in front of welfare offices.  Public assistance is typically seen as an abused system.  The good that it does is under-reported when compared to the abuse.

Over seventy percent of full-time workers say they live paycheck to paycheck.  The average American also has nearly $16,000 in credit card debt.  For those seeking an education, student loan debt piles up faster than job opportunities.  Many Americans are balancing on the edge of homelessness and bankruptcy.

Eubanks looks at three separate areas in three different parts of the country and examines what automation has done in determining benefits and the problems it causes. Poverty in America is real and a growing problem.  We see it every day and do our best to block it out.  Americans also have a history of moving away from poverty — out of the cities and into the suburbs and back again.

The first area Eubanks describes is automation and privatization of public services to save money and limit fraud (which is very small).  Applications are done over the phone to a call center (which was problematic for the deaf) or online.  In poor areas, libraries and librarians are overrun trying to provide internet service to patrons filing for benefits.  In one case (years ago, I imagine) a woman added the food stamps phone number to her family and friends list because she spent so much time on the phone with them over benefits.  When Indiana automated it was a disaster.  Call centers and document centers did not follow through on paperwork many lost benefits for failure to cooperate when paperwork was lost.  This was life-threatening to many on medication.  Fixing problems was met with resistance, paperwork, and delays.

Skid Row in Los Angeles became the defacto homeless area.  Keeping a defined area homelessness helped insulate the public from the homeless.  Gentrification, however, pushed the homeless out of their “home.”  Arrests for sitting or laying on the sidewalk, confiscation of property, and basically criminalizing homelessness became the government’s solution.  In Pennsylvania, Child Services uses an algorithm to predict future behavior.  Vendetta calls remain in the parent’s/child’s records.  In both cases, algorithms have taken over for human interaction and understanding.  Computers take certain answers but most of the time no matter what is being filled out “Other” is filled out especially when something as important as physical and mental health.  Computers are poor interpreters of “other.”

Automating Inequality demonstrates the problems of algorithms and automation and what it does identify the poor and many cases work to keep the poor poor.  The system was intended to provide assistance for the short term and help people out of poverty has become a system to perpetuate poverty.  An interesting report based on real-life examples and real-life workers.