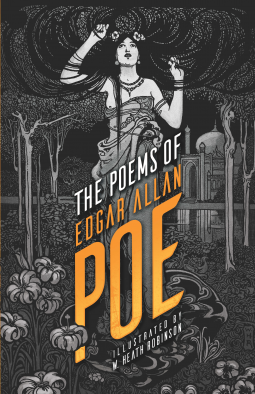 This edition by Dover Publications recreates the 1900 Endymion editions.  Poe is mostly known for his short stories, but his poetry is an important part of his work.  This edition goes beyond “The Raven”, “The Bells”, and “Annabel Lee”.  Some poems seem out of place. Two of his poems “Al Aaraaf” and “Israfel” seem out of place for an American poet of the nineteenth century.  “Al Aaraaf” is based on stories from the Koran and influenced by the 1572 supernova discovered by Tycho Brahe.  Israfel is an archangel who has the sweetest voice in all of heaven  She will blow the trumpet to summon the dead on judgment day according to the Koran.

Poe wrote many poems to or about women.  Two of the published poems hide a woman’s name in the structure of the poem.  In a very Poe like fashion, several of the women are dead — some obvious and some not right away:

My love, she sleeps   Oh, may her sleep,
As it is lasting, so be deep;
Soft may the worms creep about her!

There is little doubt about the gothic tone of his mature work.  His early work is also included in this edition in its original form with the admittance of the sin of plagiarism.  The young Poe was eager to show his heroes and not everything was quite as dark in his writing.

The edition rounds itself out with excerpts from his unfinished play “Politian”, letters to introduce his poems, an essay on poetic principle, and an essay on the philosophy of composition.  This edition helps completes the picture of Poe as a writer.  Even in poetry though there is little doubt the work is by Poe; it has that familiar feel to it.  To add to the poetry this edition richly illustrated with pen and ink drawings from W. Heath Robinson.  These drawings add visual drama to the reading and lock the reader into the 19th-century gothic fantasy.  A very nice book to keep and enjoy.