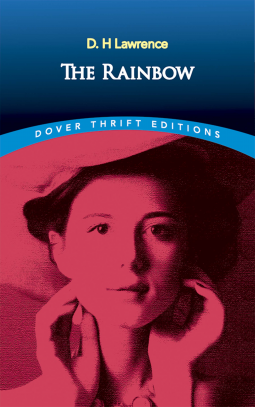 The Rainbow by D. H. Lawrence is perhaps one of his finest works.  Lawrence was born in 1885 the fourth son of a coal miner.  He was a sickly child and graduated teacher’s training in Nottingham.  His writing created controversy and lead to some of his books and stories being banned.  Lawrence’s most popular themes were the sexual and physiological life and the implications of class difference.

The Rainbow, published in 1915, covers the life of the Brangwen family from the 1840s through 1905.  The opening chapters set the theme.  The Brangwen farm was in a very rural setting and the building facing back into the land.  The main house looks out on the road.   It is a separation of the world inward looking and outward looking.  Industrialization of England brings change to the rather isolated family.  First, a canal is built across the farmland and although the family is compensated for the intrusion it divides the farm.  Next comes the railway not only crossing the farm but also bringing the noise smoke and whistles of a modern world to their simple life.  Tom the youngest son also discovers sex, with a pub prostitute, which defines a different role in his mind for women outside of mothers and sisters and later women he would meet.  He will eventually marry a widowed Polish refugee, Lydia.

The second section of the book deals with Lydia’s daughter from her first marriage and Will, the son of one of Tom’s brothers.  The happy marriage turns to one based on sex and fertility.  The oldest daughter, Ursula, is the main character in the third and final part of the book. Ursula provides the most famous part of the novel not only her life and lovers but also those who she meets.  Society still strict rules create a culture that manufactures appearances to hide desires.  Social restrictions, morality, industrialization, and colonialism all play a role in the book although it is primarily known for its sexual themes.  The book was prosecuted for obscenity in 1915 and was unavailable in England for eleven years.

This Dover edition contains only a brief note of the author and of the story.  For a classic book, however, little is needed in an introduction.  Lawrence, although a modernist, writes in a clear way.  The setting descriptions may be filled with small details and the characters filled with complex thoughts but the reading is easy to understand and the themes are nearly impossible to mix.  The Dover editions, as always, bring quality works and quality printing at a very fair cost.