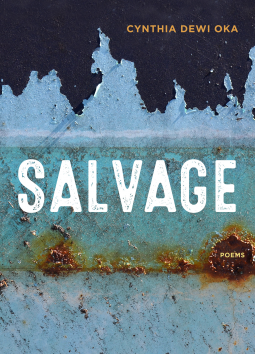 Salvage: Poems by Cynthia Dewi Oka is the poet’s second collection of poetry.  Oka is the author of Nomad of Salt and Hard Water. Originally from Bali, Indonesia, she is a two-time Pushcart Prize nominee and a recipient of the Fifth Wednesday Journal Editor’s Prize in Poetry as well as grants from the Leeway Foundation and Vermont Studio Center.   She is based in the greater Philadelphia area, where she works as a community organizer with immigrant and faith communities.

Some people think their lives are a wreck.  Some countries are in the process of being wrecked.  Some see the world, the planet, on its last gasp.  Oka looks around the world and into lives to find what can be saved or salvaged.  “Ishtar in Suburbia” opens with a message of how many have been killed in the 423 US drone strikes in Pakistan and continues:

There is a way to cleanse the sex out of war
I mean libido, lick. The funk
& nasty. The sweat-paste, moaning
hair

She brings it home:

You ride the train downtown.
Past the crow-picked rubble. Charred row houses
Their windows missing like teeth.

Pain and destruction are not far in many poems.  Oka reminds the reader:

The Hellfire travels 995 miles per hour.  Where it lands, soul
is freed like fire through skin, touching dirt for the first time.

There is even a scattered poem “Elegy for the Hellfire”

Not everything is manmade. “After Hurricane Sandy” ties to the land of the native people and is followed up “Nom De Guerre.” The First People of Quebec stand up to the Mounties and the military to protect their burial grounds from an expansion of a golf course.  While British Columbia brings thoughts of wilderness and Vancouver city, Oka takes the reader to the Downtown Eastside which is on par with any American big city in murders, drugs, and prostitution.  Tribute is paid to the women murdered there and is followed up with “Jesus is Tested in the Downtown Eastside” which would give the diety more of a challenge than Satan in the desert.  From there the reader is moved to the poet’s homeland of Indonesia.

Oka follows with a series of sonnets for her mother.  This showcases her ability as a poet.  She shows that beyond creative language she can remain creative in the strict confines of rhyme schemes and line structure.  The final section of the collection turns farther inward than places and even parents.  It is the poets look inward.  Salvage is a wide-ranging tour of our world and ourselves.  Oka has an intriguing style and insight.  Her work is thought-provoking and this is a collection that one will enjoy reading and rereading.  It is a collection that the reader will want to keep on their shelf and not let it slip away into the hands of friends.