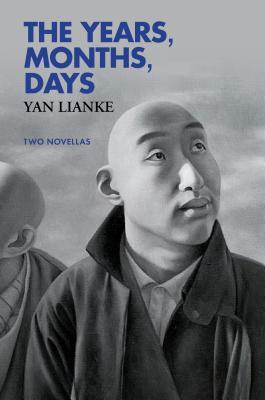 The Years, Months, Days: Two Novellas by Yan Lianke is a translation of one of China’s rising writers. Lianke is a Chinese writer of novels and short stories based in Beijing. His work is highly satirical, which has resulted in some of his most renowned works being banned.

Carlos Rojos gives the introduction to this collection.  Lianke is no stranger to hunger.  He was born in the first year of the Great Leap Forward (1958).  The rush to grow an economy rivaling Britian ended up creating famine instead.  Tens of millions died throughout the country.  It is little surprise that the title story of “The Years, Months, Days” centers on drought and hunger.

The village elder decides he would not survive the move east out of the drought affecting the village so he decides to stay and care for a seeding corn plant.  The plant represents the village’s future as the source for seed for the next season’s crops.  The Elder is left with a blind dog as a companion who seems to understand what he is being told.  The story has a Twilight Zone eeriness to it. The loneliness and emptiness of life jump from the pages.  It is as if the elder was abandoned on a barren planet and not his home village.  He takes his duty to the plant seriously and the aptly named dog, “Blindy”, becomes his world to him.  Hunger and unexpected enemies begin to make life even more difficult.  The Elder’s senses adapt to his surroundings.  He can hear the sunset and the sound of his corn plant growing.  He measures the sun’s heat by its weight.  It is a story of duty where minor things become the most important.

The second story, “Marrow”, takes the uncanniness in a different direction.  Here an almost fairytale imagery drives the story.  Stone You and Fourth Wife You have three daughters who suffer from what seems like a form of epilepsy and not much intelligence. Counting to ten and performing simple tasks were nearly impossible.  The children acted more like apes than humans.  Stone You drowns himself after finding out Fourth Wife You was pregnant again.  Fourth Wife worked the farm and raised the children.  Daughter Number One and Daughter Number Two had been married off to men who were also less than whole.  Daughter Number Three is tormented by the youngest, her brother, Fourth Idiot.  The bulk of the story is finding Daughter Number Three a “wholer” to marry. This story reads like a demented fairytale the reader will be both appalled and drawn into the story.  It is disturbing in many ways but still something not to be put down.

Lianke can weave a compelling story despite the bleakness of the first story and perhaps the, contemporary American,  offensiveness of the second story.  Both stories are writing in a simple but beautiful language.  The simplicity of the language is much akin to the skills needed in making an old movie before special effects.  The reader relies on Lianke’s profound storytelling ability rather than gimmicks or tricks.  A very interesting and worthwhile cross-cultural work.