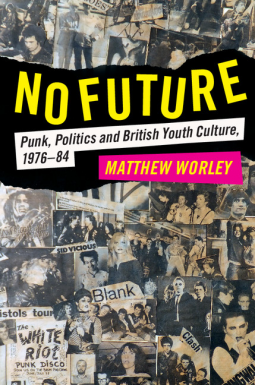 No Future: Punk, Politics and British Youth Culture, 1976-1984 by Matthew Worley is a study of the Punk Rock movement and its evolution in England. Worley is Professor of Modern History at the University of Reading specializing in 20th century British politics with a particular interest in the labour movement.

America had its punk rock movement in 1970s New York. The Ramones, Television, Lou Reed, Patti Smith, and the New York Dolls played to shock American rock out of its corporate rock slump and put an end to disco. In the 1980s West Coast punk came into being and was much closer to the British movement in style.

The British punk movement was built almost out of necessity. “No future” was much more than a catchphrase but it was a deeper feeling of the bleak destiny. Today, young Americans can expect not to do as well as their parents and not live as long either. Americans hide in cheap consumer goods and an abundance of processed food. The British youth fought back with music and attitude. Margaret Thatcher is still hated in England while Reagan moved quietly into history. The British economy was in shambles — high unemployment and inflation. Unions lost power most famously in the 1984-85 coal miners strike. State industries were privatized. Squatting became a common necessity. The threat of nuclear war (and the Falkland Islands) proved to many that there was no future.

The Sex Pistols and (now British Butter spokesman) Johnny Rotten (Lydon) take center stage in this book. The Buzzcocks, Crass, Malcolm McLaren, Siouxsie Sioux, The Adverts, and the Clash all make it into this book and their role in the evolution of Punk Rock. Punk rock was not a monolith but an evolving movement.  Punk was not just music.  It was art, sex, and style. It had many players from anarchists, communists, and the far right.  Neither the mainstream liberal or conservative parties accepted or considered the punk movement part of their ranks. It was not about changing just the music like in America; it was about changing society as a whole.  The youth acted out against a system that abandoned them.

Punk evolved.  The most well known and first to gain popularity was “dole punk.”  The dole was the welfare system that was used to support those out of work.  It would eventually be cut back by Thatcher.  In 1976 England need to take out a $3.9 billion loan from the IMF.  It was the largest loan ever requested at that point.  The English government was forced into an austerity program to stabilize the pound and England’s sovereignty.  The Labour Party began to splinter giving rise to Thatcher.

Bands like the Buzzcocks produced their own EPs in a do it yourself (DIY) fashion.  DIY became a movement of not counting on commercial production for your needs.  It was an attempt to separate from the system.  While some groups initially believed in self-reliance later these same groups worked with charity efforts. The range of music types was large from Aryan to reggae with Oi punk trying to unite the various groups.

I took plenty of notes throughout this book hoping to include them in this review.  I found myself with a pile of notes and ideas I could not fit in.  This is also a little surprising since one-third of the book is notes and source material.  The material is from a variety of reputable sources as well as Fanzines of the time which connected with the feelings and views of the youth from that period.  Well written.  Well researched and literally packed with relevant information on a pivotal point of social, music, and art history.