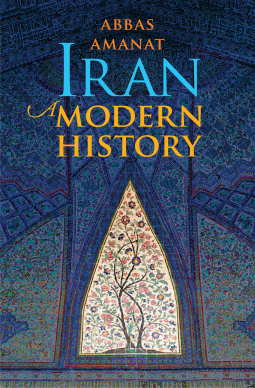 Iran: A Modern History by Abbas Amanat is a detailed five hundred year history of Iran. Amanat received his B.A. from Tehran University in Social Sciences in 1971 and his D.Phil. from the Faculty of Oriental Studies, Oxford University in 1981. He is a Professor of History and International Studies and Director of the Yale Program in Iranian Studies. Amanat is a historian of Iran and Shia Islam, and the modern Middle East. He specializes in Qajar Iran as well as the history of messianic and apocalyptic movements in the Islamic world.

For many, Iran became a fixture in American politics 1979 with the revolution and the taking of American hostages by college students. Iran was in the news again with talk of Reagan and the hostage release and later arms for hostages. Today Iran is the news as the US and others work to stop their nuclear weapons development. For those with a sense of history, President Hassan Rouhaniseemed to mimic Woodrow Wilson with his statement that “Death to America” is not directed to American people but to the actions of the American government.

Iran (or Persia) has a long a history and a deep culture that is detailed in Amanat’s book. Culture in arts and life adds greatly to a country’s history, changing it from a detailed listing of events and adding a human factor. This is, unfortunately, missing from many histories that are not typically Western. Culture adds to the reader’s understanding.

That being said, the revealing of the history is done with great detail and clarity. Perhaps the best thing about a well-written history is it explains how a country became what it is today. Why is Iran anti- American (government)? Why is Iran so concerned about its security? Are nuclear weapons a power grab or just a deterrent? Why do so many allies of the US have full diplomatic relations with Iran? How can one Muslim state be at odds with nearly all other Muslim states?

I found the period between World War and World War II the most interesting and, for my part, the most unexpected.  This is the birth of modern Iran and its regional and international struggles.  Here too is where the internal struggle between conservative Islam and Western culture seem to clash and continue to struggle even today.

Iran has a rich history that is a struggle.  That history also explains why present-day Iran evolved into what it is.  For many Americans, it seems more like a Cold War situation, a representation of worldwide terrorism.  To Iran, it sees a world ready to exploit any weakness and remembers every betrayal on the world stage.  This is a book that will bring a broader understanding of a country that only preconceptions exist.  The first step in better relations is understanding. Amanat does a tremendous job of educating the reader, even a reader with a background in history.