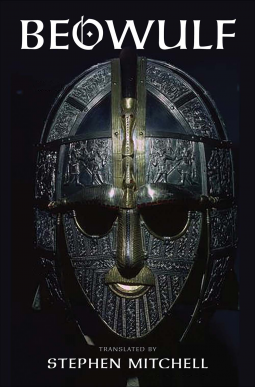 Beowulf by Translated by Stephen Mitchell is a contemporary translation of the classic poem. Mitchell was educated at Amherst, the Sorbonne, and Yale, and de-educated through intensive Zen practice. His many books include the bestselling Tao Te Ching, The Gospel According to Jesus, Bhagavad Gita, The Book of Job, Meetings with the Archangel, Gilgamesh, The Second Book of the Tao, and the Iliad.

It was in high school years ago that I first read Beowulf.  Monsters, Vikings, and adventure sounded like it would be a great read, however, it turned out to be misery. The text was in old English and not the thing my high school brain wanted to focus on. I asked why it wasn’t written in modern language. I was told it would lose it poetic style and intent. Little did I know, we were reading a translation. Several translations exist of the now unreadable original English. Many high schoolers were probably happy with the 2007 release of Beowulf with Angelina Jolie as Grendel’s mother. Mitchell points out one major flaw of that movie. The characters in the movie talked in almost comic book fashion rather than the well-spoken characters in the original text.

Translations also bring about the problem of the poetry and in particular in this poem the alliteration. Mitchell keeps this alive with alliteration with repeated sound over that of just the first letter. There is a rhythm with words and the line structure that holds true to the original.  In the introduction, Mitchell also discusses another interesting point of the poem, religion.  In the poem, a singular God is mentioned throughout.  It is not the Norse pantheon.  The God, however, is a bit ambiguous.  Although called Lord and mentions Cain, it does not seem, historically or in the poem, to be the Jewish God.  Yet, the text makes no reference to Jesus or the New Testament.

Mitchell’s translation does an excellent job of preserving the story as well as the literary quality of the original work.  This translation avoids the graphic novel treatment of the classics in simplifying language and the plot.  It is the full text in a format that is easily comprehended by most readers.