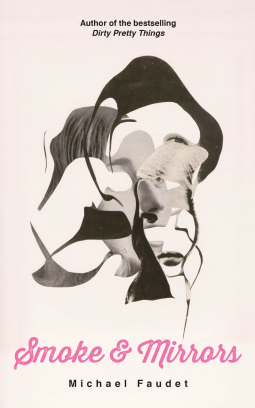 Smoke & Mirrors by Michael Faudet is the poet’s third collection of published poetry. Faudet is a bit of a mystery and there is some question as to if he is actually a creation of Lang Leav. I don’t subscribe to that explanation but there is a similarity between the two in writing and the fact that they are partners may add to that speculation. Faudet does seem to follow R.H. Sin in not providing personal information. The style of the three poets mentioned above does seem to follow the same format of short poems about a single loved one.

I read Faudet’s Pretty Dirty Things last year and found that he had a talent for pushing limits without the reader knowing that he or she are crossing any. Faudet’s poems do tend to be a bit longer than the two or three line “song lyric quotes” that have been unbelievably popular with the younger hip crowd. In this collection, there is a rather lengthy piece of prose near the middle. The prose is, again, like many poems, more of an adult fantasy story. Between the sex and love Faudet inserts quite a bit of vodka.

Some poems reach for more like “Freedom” and others like “Fame” are basically teenage dreams. “A Long Distance Relationship” is a prose poem chronicling the end of a relationship. In this poem, Faudet concludes with a statement outside of the poem much like a moral in a fable — Absence doesn’t always make the heart grow fonder. Sometimes it just teaches us that we can live apart. Singling out my favorite would have to be the story “The Missing Sock.” It’s conclusion, although rather simple, is a small revelation of the truth.

Smoke and Mirrors is a well-mixed collection of prose and poetry.  I was glad to see poems that were more than a few lines long and a variety of styles.  The title poem was actually very good too which is a bit of a rarity.  This is a collection that the younger crowd will enjoy.  The success of this collection, again, is in the mix of poetry and prose and the rather adult subject matter will hold most readers attention or imagination.