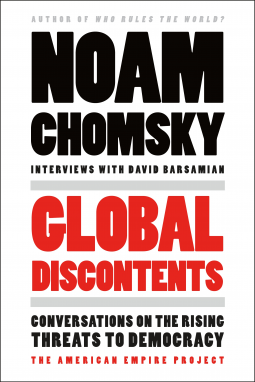 Global Discontents: Conversations on the Rising Threats to Democracy by Noam Chomsky and David Barsamian is a collection of ten interviews conducted between 2013 and 2017. Chomsky is sometimes described as “the father of modern linguistics.” He is also a major figure in analytic philosophy and one of the founders of the field of cognitive science. He is the author of over 100 books on topics such as linguistics, war, politics, and mass media. Ideologically, he aligns with anarcho-syndicalism and libertarian socialism. He holds a joint appointment as Institute Professor Emeritus at the Massachusetts Institute of Technology (MIT) and laureate professor at the University of Arizona. Barsamian is an Armenian-American radio broadcaster, writer, and the founder and director of Alternative Radio, a Boulder, Colorado-based syndicated weekly public affairs program heard on some 250 radio stations worldwide.

Noam Chomsky is a giant not only in linguistics, but also political science. His name is familiar to most people without introduction and there are few, if any, ambiguities in his positions. During these interviews, Chomsky reinforces his political and foreign affairs views that have been published in his other works. At 88, Chomsky is not backing down from his long-held positions. The final interview in the series takes place in June 2017. Here some new information is given. Chomsky tackles the Trump presidency, North Korea, and Bernie Sanders. Sanders is an interesting discussion of the idea of “revolution” in American politics.

Most of the interviews contain explanations of Chomsky’s previous writings and how earlier explanation still apply in today’s world. The rise of ISIS is discussed as well as how to deal with North Korea. Both organizations react negatively to outside force and seem to gain more support when external pressure is applied. Perhaps the largest threat Chomsky sees is the threat of climate change and the war against doing anything to stop it. The overwhelming majority of scientists agree but capitalism’s monied corporations have a much larger voice through lobbyists and supported government representatives. Chomsky even mentions an educational program that on the surface seems to recognize climate change, but instead uses its resources to debate the subject sowing seeds of doubt in young minds.

Chomsky also looks in at America too. The “Make America Great” slogan is laughable. Chomsky believes what made America great was not the mythical 1950s image that the right has today but the sense of community and helping. Today so much is put on consumerism and individual importance. One merely has to watch traffic at intersections and crosswalks to see this in everyday life. We don’t want to build community. Schools lose funding. Arts and libraries suffer. Tax cuts feed the consumerism and corporate profits. Much of the labor is done overseas. Resources are removed from poor countries increasing ill will. The US supports dictators who have raw materials we need. One of the most repressive regimes and whose money actively supports terrorism is our ally, Saudi Arabia. We sow the seeds of hate in the poor both at home and around the world.

Global Discontents provides a great overview of Chomsky’s thinking and his earlier writing.  Chomsky also gives the reader some insight into his personal life.  In the discussion of one quote about Voltaire and crossword puzzles, he explains: “But you can learn things much more easily just by opening the pages of a serious book.” Global Discontents is one of those serious books that from which one can learn many things.