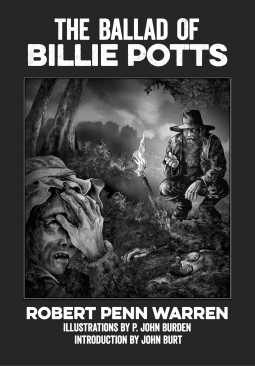 The Ballad of Billie Potts by Robert Penn Warren is an American version of an international folktale. Warren was an American poet, novelist, and literary critic, and was one of the founders of New Criticism. He was also a charter member of the Fellowship of Southern Writers. He is the only person to have won Pulitzer Prizes for both fiction and poetry.

John Burt provides a detailed introduction to the story set, in this version, in Kentucky. The story itself is a folktale in Eastern Europe, Ohio, and points further west in the US. The introduction, itself, is longer than the poem. The background provided is excellent. This edition is also illustrated by P. John Burden whose almost three-dimensional renderings are haunting and very much add to the story. The dark works have an unsettling effect as well a constant reminder of doom represented by the crow.

The poem and the drawings represent the land between the water. This, in American lore, is the separation of the established East and the untamed West. The Potts’ Inn represents the border between the East and the West. It is very reminiscent of the introduction to the TV series The Twilight Zone:

It is the middle ground between light and shadow, between science and superstition, and it lies between the pit of man’s fears and the summit of his knowledge.

As the poem progresses the separation between wilderness and metropolis shrinks until the middle ground almost sits on the edge of a great city contained in something like a park. No longer wilderness in a true sense but a civilized version of the wild… a safe wilderness.  The Potts are not safe and prey off of weaker and richer travelers.  They are an element of danger in moving to the west.  It is city folk versus those people who live in Charlie Daniel’s “Wolley Swamp” or even Hank Williams Jr “Country Boy” song.  Here Warren uses poetry instead of lyrics, but like lyrics, he repeats a refrain “in the land between the rivers.”

A haunting bit of poetry, folklore, and artwork complete a tale that will chill the reader.  The reader will be left to consider which aspect of the book is most important.  Is it the lore, poetry, or artwork, or is it perhaps a perfect combination of the three.  The introduction and a little US history of the expansion West will give the reader a near perfect picture of the Americanization of a folktale.  The story itself verges on creepy and has an exaggerated Appalachian setting.  As Burt notes in the introduction, there is no redemption in this tale but the reader may notice a progress of time and industry unaffected by  “the land between the rivers.”  Very well done on several levels.

2 responses to “Poetry Review — The Ballad of Billie Potts”