Book Review — First to Fight: The U.S. Marines in World War I

First to fight for right and freedom
And to keep our honor clean;
We are proud to claim the title
Of United States Marine. 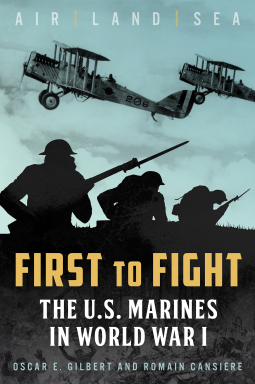 First to Fight: The U.S. Marines in World War I by Oscar E. Gilbert and Romain Cansiere is the story of the birth of the modern Marine Corps. Gilbert, Ph.D., (University of Tennessee), is a former Marine artilleryman and currently a geoscientist living in Texas. His previous published works include the widely acclaimed Marine Tank Battles in the Pacific and Marine Corps Tank Battles in Korea. Cansiere is a native of Avignon, southeastern France, with a university diploma in agronomic technology from Provence University.

Every Marine can tell the story of Belleau Wood. WWI was the turning point for the Marine Corps. It went from the traditional role, as British Royal Marines, as a naval security. Slowly that role changed in the early twentieth century when the Marines were used as infantry in the Philipeans and Vera Cruz. Previously the Marines served as “police” in unstable Latin American countries and were known as the “State Department’s troops.” The First World War allowed for the Marines to expand into the role of traditional infantry.

The authors cover, in great detail, the history of the battle at Belleau Wood. A day by day account is given with first-hand information including an uncompleted letter home from a Marine who did not make it. Also included are lesser know battles of Soissons, St. Mihiel, and Meuse-Argonne covered in detail. Not surprising the author’s also include some information on the tanks being used on the Western Front.

First to Fight does not exclude those away from the trenches.  Marines serving in anti-submarine artillery in the Azores and those on usual shipboard duty.  The Marines were also one of the first services to use women.  Women Marines took care of clerical and other tasks to free up men who were badly needed in the trenches.  Being the smallest branch of the services, even small losses of men created a severe shortage.  Recruiting was not a terrible problem for the Marines.  News reports from Vera Cruz, sharp uniforms, and a reputation as professionals made the Marines a desired service.  Up to 70% of those who volunteered were rejected mostly for medical reasons.  Marines trained at Mare Island and the still functioning Parris Island.

Another area that is often ignored is covered in First to Fight.  Marine aviation got its real start and almost it end in World War I.  Marines Flew with British who had machines but lacked pilots after years of fighting.  Aviation would become important to the Marines after World War I.  In the interwar years, Marines fought and trained in Latin America.  Marine aviation worked with ground forces and developed close air support.  This allowed planes and ground troops to work together combining their effectiveness.  Close air support became an important doctrine in future conflicts.

First to Fight covers the evolution of the Marine Corps from security and landing party support to an independent acting force that would be the first to fight in many of America’s declared and undeclared conflicts.  That special pride that Marines have always had in the Corps is seen in the pages of this book. And another thing in the Marine Corps over a hundred years is Marines complaining about food and the lack of it.  A well-written and informative (even for Marine veterans) account of the Marines in the First World War. Semper Fi, Marines.