Book Review — The Art of Sanctions: A View from the Field 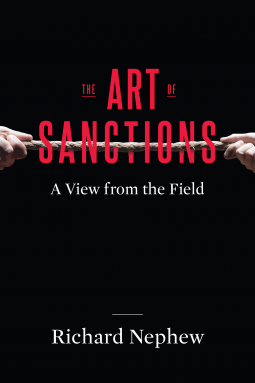 The Art of Sanctions: A View from the Field by Richard Nephew is the study of sanctions as an effective diplomatic tool. Nephew is a nonresident senior fellow in the Foreign Policy Program and affiliated with the Arms Control and Non-Proliferation Initiative housed within the Center for 21st Century Security and Intelligence. He is also a research scholar and program director at the Center on Global Energy Policy at Columbia University. His present research is focused on the use of sanctions for deterrence and impact on present U.S. foreign policy challenges.

Sanctions have a notorious perception of being ineffective as a diplomatic tool. The United States completely blocked Cuban imports and exports but Cuba continued on its path because of support from the USSR and other non-aligned countries and even American allies. For Americans wanting Cuban products, it was a simple trip to Canada or Mexico. Vietnam also fell into this category. Sanctions were and are seen as a failure in Iraq and Iran. Can sanctions be effective in despite apparent string of failures?

Nephew discusses Iraq as the start of his study. Sanctions are meant to cause pain to encourage change. Once the change is implemented the sanctions disappear or are replaced with aid. The problem with dictatorial countries like Iraq, North Korea, and Cuba is that there is no force of change in the country. Sanctions are applied and the corrupt and higher ups still have all they need. The people in general suffer. That suffering is often used as fuel by the local government. It is not the people’s leaders who are making them suffer, it is the US (and or the West). In Cuba, bad times were often off set with rallies condemning the US. North Korea is so closed off that its people believe they have the second best economy, next to China. Also put forth is the belief that the US lost the Korean War and the food aid being sent to North Korea is actually war reparations.

In Iraq, the government was deeply entrenched and the opposition was usually imprisoned or executed. Hussein was not a rational player on the world stage. This made it difficult to pressure any change. Twice he went to war against his neighbors and was at a loss of allies which eventually allowed military intervention, twice. Nephews next turns to Iran which despite the US claim of being a rogue state, does, for the most part, act as a rational player. It has relations with 97 nations compared to North Korea’s 24 nations with full diplomatic relations. Iran’s nuclear program is an issue and a nuclear armed Iran is considered unacceptable by the US. Interesting to note that under the Shah the nuclear program was acceptable. Iran tends to better listen to the world than Iraq and other countries. Its people do have limited choice in the local and national elections. Blindly believing in the Western Devil has faded and there has been a rise in materialism. The massive death toll of the Iran- Iraq War still leaves a bitter taste in the population when the idea of war becomes the topic. Iran can be persuaded with sanctions as long as they are effective. However, the US ban on importing gasoline only lead to Iran developing and expanding its oil distillation infrastructure.

North Korea is the last main player (aside from Russia). With a shared border and a strong protectorship with China, sanctions prove difficult. Although ships heading in and out of North Korea may be searched and checked, only China can control its border with North Korea which provides a gaping hole in any economic sanction. North Korea also knows that there is little the US can do militarily. Seoul is only 35 miles south of the border and provides a more than adequate hostage being well with in range of conventional and nuclear forces. North Korea’s missile flights over Japan also demonstrate another potential hostage in a military conflict.

Nephew examines the use of sanctions in the past and present while offering options of the future sanctions with Iran, North Korea, and Russia.  He recognizes sanctions can be effective if correctly used.  That becomes the main focus of this work, how and which sanctions are effective.   The difficulty of correctly administering sanctions in an effective way.  Varying alliances and the difficulty to get countries to commit are always problems.  Corruption of the local governments prevent sanctions from being evenly distributed and autocratic governments can reflect the blame back onto the countries administering the sanctions.  Sanctions, however, do and can be a successful alternative to military action.  The problem remains in the execution.  Nephew does an outstanding job at describing the problems and benefits of sanctions in today’s world.  Very well done