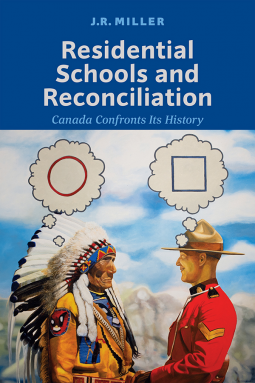 Residential Schools and Reconciliation: Canada Confronts Its History by J R Miller is the study of actions and reforms in the Native Peoples’ treatment and standing. Miller is a professor emeritus of history at the University of Saskatchewan. He is the author of numerous works on issues related to Indigenous peoples including Skyscrapers Hide the Heavens and Shingwauk’s Vision, both published by University of Toronto Press.

I picked this book up as a comparison to how the Native People were and are treated in the areas that are now the United States and Canada. The US Native Americans have and continue to be marginalized. Life on the reservation remains poor. Those outside the reservation must adapt to a Western way of life although the social pressures of “fitting in” have been lessened as society evolves. There is still violence as Wounded Knee in 1975 showed. Presently Standing Rock shows how capitalism trumps treaties and sovereignty.

In my reading and study of history Canada played only a minor role mostly in the War of 1812, WWI, and as a Cold War partner. Treatment of the Native Peoples never made headlines here. The general assumption was, by comparison, Canada did rather well. The reality of that assumption is another matter. The Canadian government teamed up with the four major branches of Christianity — Roman Catholic, Anglican, Methodist, and Presbyterian. The government wanted inclusion in education and health care. The church(es) wanted conversion. The churches had the drive and motivation to carry out the work.

The residential schools were disastrous and brutal. Most ended in the 1970s with a flurry of civil suits against the government and churches. Churches and the government started a process of reconciliation with apologies and compensation. Miller covers both sides and details the progress and hangups. The continuing work of the Royal Commission on Aboriginal people and the Constitution Act of 1982, section 35 recognizing Aboriginal rights has brought about a great deal of change although not it is not complete it does recognize the errors of the past.

Residential Schools and Reconciliation documents the struggle for rights of Aboriginal peoples of Canada and the progress made so far. It also shows a more conscious effort to correct wrongs and improve the current situation. It is not complete but by comparison, it is much better than other aboriginal peoples have fared. A well-documented history that seems to honestly describe the issues and errors of the past.