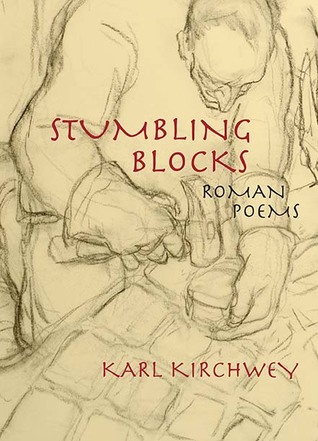 Stumbling Blocks: Roman Poems by Karl Kirchwey is a collection of poetry centering on Rome. Kirchwey received a BA from Yale College and an MA from Columbia University. Rich with mythical and historical allusion, Kirchwey’s formally assured verse explores themes of loss and origin.

This is a rather mixed collection with many works written as prose rather than poetry. The lines between prose and poetry can be blurry at times but most prose poems express imagery and a lyrical sense. Several of the poems in this collection could easily pass for prose or even informal conversation rather than poetry. The collection opens strong with “Thought Experiment.” Caesar’s last breath of air is still circulating around the earth. In fact, a molecule of that last breath may be in your lungs right now. “Janiculum Passage”, although very much written in prose, captures some of the imagery of Rome. The title poem is also present and explains itself in a historical sense.

The collection is hard to classify. It is interesting in its history and descriptions of Rome. I came away feeling that I learned a bit about Rome, ancient to the present. I can’t say that I will remember this as poetry or as an informal history or cultural lesson.