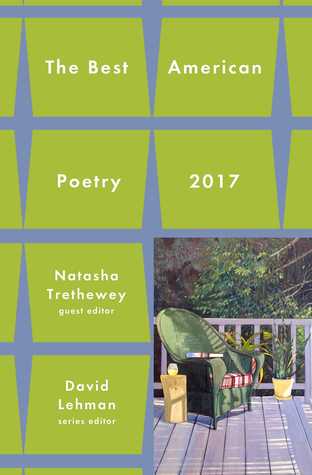 Best American Poetry 2017 series edited by David Lehman and guest edited by Natasha Trethewey is the 30th edition of this collection. Lehman is a poet and the series editor for The Best American Poetry series. He teaches at The New School in New York City. Trethewey is an American poet who was appointed United States Poet Laureate in 2012 and again in 2014. She won the 2007 Pulitzer Prize for Poetry for her 2006 collection Native Guard, and she is a former Poet Laureate of Mississippi. She is also the Robert W. Woodruff Professor of English and Creative Writing at Emory University, where she also directs the Creative Writing Program.

It has been a troublesome year for many. Lehmann opens with the controversial selection of Bob Dylan as the recipient of the Nobel Prize in Literature. The selection divided many in the poetry field and was met by disappointment that a woman was not selected. Other were satisfied that some in the more bardish sense had won. Shortly afterward the United State held an election that further divided the country. Many in the arts were unhappy with the electoral results. Soon Twitter was ablaze with the “Resist” message from poets and writers. The new year also seemed to fill its pages with stories of police shooting unarmed men, women, and even children of color with follow-up stories of no charges filed against the shooter. For many, it was a fearful year and that despair is also reflected in this year’s collection of poetry.

Bob Dylan only gets a passing mention in this collection by Chase Twichell in “Sad Song”. However, the rest of the collection does reflect the other concerns in the previous paragraph. For those who read poetry because it offers an escape from modern problems and takes the reader to their own “Tintern Abbey”, this collection is a reminder of the real world and your news feed. From the opening poem “Weapons Discharge Report” by Dan Albergotti through Monica Youn’s “Greenacre” the tone is set. Pamela Sutton’s “Afraid to Pray” almost seems to predict the recent trouble in Charlottesville.  R.T. Smith’s “Maricon” reminds the reader that hatred goes deeper than race.  The poems are not all of rage but of reflection.  Danusha Lameris’ “The Watch” runs deep.

This year’s Best American Poetry is not the escapism or the celebration usually associated with a “best” series.  It takes poetry as a voice of resistance and information.  Like people, in general, poetry can hide in the background and not become a political or social tool for change, but only for so long.  Arts are meant to be a reflection of society.  Today art is being cut in public schools to save costs.  The current proposed budget plans to cut both the NEA and NEH.  When art, as well as people, are threatened they fight back.  Here, poetry is using its voice to remind us what society and its leaders have become.  We are losing our ability to evade the outside world with arts be it reading, painting, or music. Although it would be hyperbole to compare this collection to Picasso’s Guernica, it is a warning.