Book Review — The Reminiscences of a Marine

“The key to combat effectiveness is unity — an esprit that characterizes itself in complete, irrevocable, mutual trust. Now my infantry trusts my artillery and engineers, and my artillery and engineers know this so they will go through hell itself before they let down the infantry. My infantry believe that with such support they are invincible-and they are.”
John A Lejeune 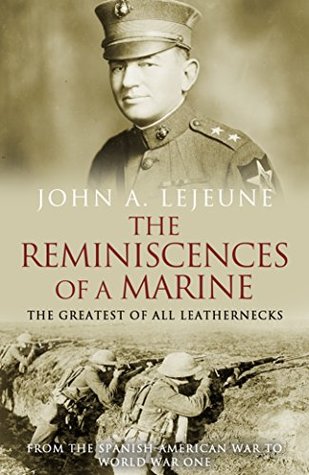 The Reminiscences of a Marine by Major General John A. Lejeune is an autobiography of a United States Marine and 13th Commandant. The Marine Corps’ history has been filled with boisterous leaders and heroes. In his address as Commandant of the Marine Corps (1921), he notes that Marines have been fighting for America (or American interests*) 90 of America’s 146 years. Much is forgotten about America involvement overseas in times of peace. Little is remembered of interventions in Chile, creating Panama, China, and Latin America in general.

Lejeune lived in interesting times. He secured a position in Annapolis and received a naval commission. He then spent two years on naval ships after graduating where he was introduced to Marines serving on naval ships. He was impressed with their work and esprit de corps. A senior naval officer who put the young Lejeune in charge of a squad of Marines with the advice and recommendation of not micromanaging them. He was told to give his orders to the sergeant and step back. Noncommissioned officers in the Marines supervise the troops. Lejeune was again impressed. When his time came to chose his path in the navy, he chose Marines rather than the engineers. He actually had to fight the system that wanted him to become an engineer.

Lejeune served on the USS Cincinnati during the Spanish-American War and later on the USS Massachusetts. Where there was trouble he seemed to find his way there.  In his writing is easy to read and although he writes of accomplishments there is an absence of the usual Marine bravado instead there is a deeper professionalism.  During World War I, he was recognized by the French government as a strategist and leader, earning the Legion of Honor, and the Croix de Guerre.

To most Marines, Lejeune is remembered for establishing the tradition of the Marine Corps Birthday recognizing all Marines past and present and home to the 2nd Marine Division, Camp Lejeune.   Lejeune was instrumental in transitioning the Marines from naval infantry into a professional fighting force, although still under the navy.  He founded the Marine Corps Institute and Marine Corps schools.  Lejeune was a quiet professional who served two terms as Commandant of the Marine Corps.  He retired on on the 154th Marine Corps Birthday (1929) and accepted a position as superintendent of Virginia Military Institute.  He retired in 1937 and died in 1942.  In his autobiography, he covers over forty years as a Marine and service to the United States. Even in the title of his autobiography is titled “Marine” instead of his own name.  Well written and an informative history of a man whose life was service.