If I unravel this body
into a pool of black shimmering,

of ribbons, coils of dance, of flitting— 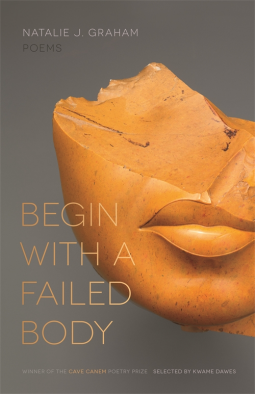 Begin with a Failed Body: Poems by Natalie Graham is the poet’s first collection of published poetry and the winner of the 2016 Cave Canem Poetry Prize. Graham earned her MFA in Creative Writing at the University of Florida and completed her Ph.D. in American Studies at Michigan State University as a University Distinguished Fellow. Her poems have appeared in Callaloo, New England Review, Valley Voices: A Literary Review and Southern Humanities Review. She is a Cave Canem fellow and assistant professor of African American Studies at California State University, Fullerton.

This is a collection that I am not a typical audience member. The poems, without a doubt, are from the female and African American perspective. Nonetheless, I found the collection fascinating. In the first section, her work seems to capture Langston Hughes voice and language. The second section moves into religious topics with Judas and Mary Magnaline as subjects. The language of her poems flows well:

The oscillating fan shakes its rickety head.
She smoothes the raised black mane of a tattooed lion
and burns like Moses’s bush, fueled at four a.m.
by God-knows-what.
from “Palatka, Florida”

Graham seems to be greater than her actual age as references to items and activities seem to predate her in several instances. Perhaps this is more of an indication of the standard of living in poorer sections of Florida. This is also reflected in worn out shoes and Sunday dress as well as, for most of us, long vanished Datsun trucks. There is also a great sense of community from family and friends who take on the role as honorary aunts and uncles. Graham also presents a great deal of history included in the collection. Those who are neither not African-American nor from the South may have missed more of the personal references and history involved in the poems.

An excellent collection and an opening to a life that many have not experienced and perhaps a reminder that it should not exist in an enlightened and modern world.

One response to “Poetry Review — Begin with a Failed Body: Poems”