Poetry Review — In a Language That You Know 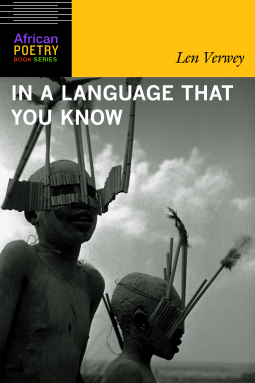 In a Language That You Know by Len Verwey is a collection of experiences from South Africa. Verwey is a South African poet. He was born in Mozambique in 1973. His chapbook Otherwise Everything Goes On is included in the boxed set Seven New Generation African Poets, and his poems have been published in various journals including New Coin and New Contrast.

Verwey became an adult in an interesting place at an interesting time. His adopted country saw a lifting of Apartheid and the release from prison and election of Nelson Mandela as the country’s president. South Africa had a new flag and rejoined the world community. It was a place of dramatic change. In the world picture, South Africa had changed. In the village picture, much needed to be done.

The poems in the collection are narrative and reflect events in Verways life. He starts early (or even before his life) with in his life in Mozambique and tells of a simple life of fishing and one of poverty.  Young Verway does have great dreams as reflected in “El Bandito de los Nadas” where he is victorious in a most unlikely event.  There is also violence and the threat of violence in real life that is reflected in his writings. The longer narrative poem “An Unchained Dog for Each of You” tells of sadness, reality,  and growing up. “Sunnyside,” tells the story of a young couple in a segregated and dangerous suburb of Pretoria and the urge to move to someplace better and the urge just to stay. Not everyone wants to make the effort when they are used to what they have, however little that may be.

Verwey’s poetry is interesting in that it gives an African perspective from one of the few developed nations in Africa.  South Africa is the only African G20 nation. In some ways, it resembled the American south decades before.  Although African in fact, it has a message that can be felt or experienced in America.  A collection that shows commonality where we least expect it.