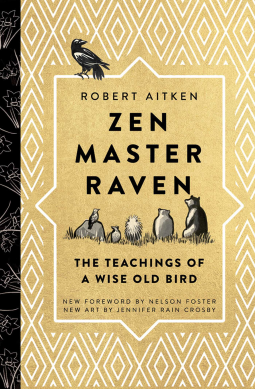 Zen Master Raven: The Teachings of a Wise Old Bird by Robert Aitken is a series of Zen teachings told through forest animals. Aitken was a retired master of the Diamond Sangha, a Zen Buddhist society he founded in Honolulu in 1959 with his late wife Anne Hopkins Aitken. His introduction to Zen was as a prisoner in World War II. After the war, he obtained a B.A. in English Literature and an MA in Japanese from the University of Hawaii.

Zen is not an easy subject and especially not an easy one to pick up by reading a book. Aitken uses the raven as his central character. The reason for using the forest animals was done for a few reasons. The most important reason was to allow him to modify the koans to make them a little easier to understand. The character animals play their roles further helping the reader understand.  There are also brief explanations in the Notes at the end of the book.

The reader will follow the Raven from his search for meaning and through his teaching of the forest animals and interactions with others. Some of the meanings jump out the readers, some require more thought, others still left me wondering.  Aitken takes his life long study and makes it accessible to the curious.  His characters aid in the understanding and the language used is simple enough for most readers.  A well-done work that teaches and entertains.