Book Review — No Less Than Mystic: A History of Lenin and the Russian Revolution for a 21st-Century Left 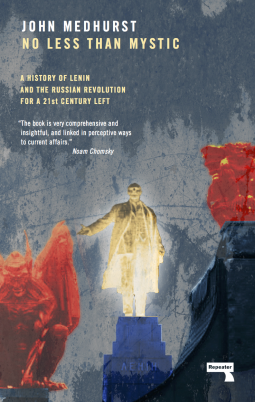 No Less Than Mystic: A History of Lenin and the Russian Revolution for a 21st-Century Left by John Medhurst is a detailed history of the Russian Revolution as a political event. Medhurst is a Trade Union Industrial Officer with a background in Civil Service and Public Sector policy issues. He was born in London and has a B.A in History & Politics from Queen Mary College, University of London. He has worked at all levels in the civil service including Job Centres, the HSE and Whitehall, in all of which he was an active trade unionist.

I have read quite a bit about the Russian Revolution since college and this book is different from most. First, it looks at the revolution as a political event. It concentrates on the political moves for power and the behind-the-scenes rather than the actual physical fighting.  The struggle between the Bolsheviks and the several other political parties (including the Mensheviks) are discussed in detail.  The revolution is shown not to be a glorious progression, but rather a series of errors, deceit, corruption, and bullying. Lenin planned the revolution but made no plans for the aftermath.

Secondly, and most importantly, it relates aspects of the Russian Revolution to other historical uprisings such as literacy programs in Latin America to educate the peasants. The American socialist movement is also covered as well the sedition act of 1918. European socialists were active but also very critical of what was happening in Russia. Liberation Theology,  The Zapatistas,  FSLN, FMLN, and the Arab Spring movement are also covered and tied into historical events in Russia.  Thatcher and the striking coal miners are also given a mention in a socialism versus capitalism in the West.

What this also shows is the corruption of Marxism under Lenin.  It was a slow, methodic move from a revolution of the peasants and workers, to Soviets (unions), to a dictatorship of the proletariat, and finally Lenin’s Dictatorship of the party.  Russia was far from a prime target for Marxism.  The vast majority of the population, over 90%, lived outside of the city.  Although Russia had a developing industrial infrastructure, the majority of the population were still in agriculture.   World War I accelerated Russia’s demise. Russia could not participate in the industrial driven warfare nor was it ready for the workers to rise up in revolt.  The revolt did happen, but it lacked direction.

Lenin was not the leader at the forefront.  He seemed to hide when the trouble arose and was more interested in consolidating his power than creating a workers’ paradise. Despite elections and their results, Lenin proclaimed his own General Will.  Trotsky gave the great speeches.  Stalin saw his opportunity to gain power.  The removal of the Czar was the beginning of Russia’s problems, not its solution.

No Less Than Mystic presents the complex process of revolution in Russia beginning 1905, through the civil war, and finally the rise of Stalin.  There was no one clear opposition movement as in the American Revolutionary War.  The system was broken and Czar Nicholas was making things worse.  There was no shortage of reasons to revolt but the desperate situation splintered opposition and Lenin managed to pick off the opposition through brute force or “legal” means.  The reader will discover how the promise of a new start evolved into a tyranny that came to represent the Evil Empire.