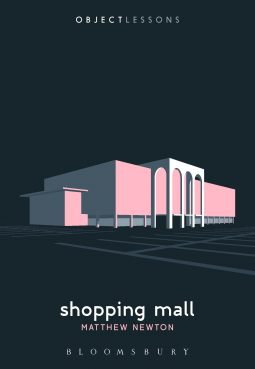 Shopping Mall by Mathew Newton is a personal history of what was one of America’s centers of popular consumerism.  Newton is Associate Editor at the Carnegie Museum of Art, USA. He has written for, among others, The Oxford American, Esquire, The Atlantic, Forbes, The Rumpus, Guernica, and Spin.

Malls were the center of so much American culture in the 1980s and 1990s. That may seem like an odd thing to say, but the mall came to represent something to American youth in that period.  American movies included malls from Fast Times at Ridgemont High to the horror movie Chopping Mall and The Blues Brothers to Jackie Brown.  The mall was a place to hang out as well as shop.  In the late 1990s, I went with friends to the mall, we never bought anything material, but it was a place where many kids hung out on Friday or Saturday nights.  When I was stationed in California I made it a point to visit the Galeria — the mecca of Valley Girls and Mohawk punk rockers as well as the setting for several teen movies of the period.  Later I went to the Mall of America in Minnesota.  My visits were not for shopping,  but more for visiting the “landmarks.”

Newton starts with a visit to one of the oldest malls in the US, the Southdale Mall in Minnesota.  He was trying to capture a little bit of the magic from his youth.  By now, though, malls have been emptying out and closing down.  His pilgrimage came empty.  Newton goes on to explain growing up and the role the mall played in his life and his families.  The malls had everything, imagine a physical Amazon.com.  There were even two floor Barnes and Nobles that dwarfed Daltons and other book sellers.  There was something for everyone from department stores to specialty stores including head shops.  Newton’s mother even worked at one of the anchor stores.

For those who grew up around the mall culture or were simply annoyed by it.  The malls original intent of being a social place for the community with open air meeting areas, fountains, and coy ponds.  In more modern times, they drifted away from the community and became centers that fed the conspicuous consumption that was the 1980s and some of the 1990s.   They did offer some community for school choirs to sing Christmas carols or meeting places for clubs and organizations.  Teen singer Tiffany ran a series of mall tours, spreading her music as well as bringing money into the malls.

Shopping Mall is a history of an American institution as well as the author’s personal experience growing up in the mall culture.  Today malls are closing faster than ever. Stores that were anchor stores have gone away (The May Co. and Montgomery Ward) and others are fading fast (Macy’s, Sears, JC Penny’s).  Newton tells of the rise and fall of the mall as an American icon.  It’s not that Americans have quit shopping or meeting up; it’s that is done online now.  A good history with added nostalgia.