Book Review — Defiant Earth: The Fate of Humans in the Anthropocene 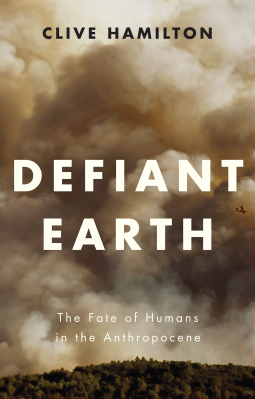 Defiant Earth: The Fate of Humans in the Anthropocene by Clive Hamilton is a complex discussion of the coming, or already arrived, Anthropocene Era. Hamilton is an Australian public intellectual and Professor of Public Ethics at the Centre for Applied Philosophy and Public Ethics (CAPPE) and the Vice-Chancellor’s Chair in Public Ethics at Charles Sturt University. He is a member of the Board of the Climate Change Authority of the Australian Government, and is the Founder and former Executive Director of The Australia Institute.

This isn’t a book warning about climate change. It seems more like the scolding a child receives after doing something wrong. You understand that what you did was wrong and that there is no way to fix it. The scolding seems to go on forever and the same things are repeated over and over again. This is a scolding to mankind.

The Anthropocene Epoch is here. The Holocene is over. The Anthropocene contains the root Anthrop meaning relating to humans or human actions. There is an argument of when this epoch began. Some proposals are the beginning of humans or the beginning of human impact on the earth (Industrial Revolution) or when man knew what he was doing to the earth and accelerated his influence (the 1990s).

This tends to be a very philosophical book rather than a science book. Different views are given and explained and sometimes leads to confusion whether these are a part of the author’s thesis or if he is arguing against it. Some are obvious like those welcoming the new epoch as a fresh beginning. There are even Evangelical Christians who are taking cruises to Antartica hoping to see the becoming of the new Eden. There are those who also think that we can return to the safety of the Holocene if we work at it or develop new technology. Still others like Reagan’s former Interior Secretary James Watt believed that the Natural Resources should be used because the Lord was due back soon and they won’t be needed after that. Other Christians argue what is meant by taking dominion over the earth — plunder or stewardship.

Hamilton brings philosophy into the mix citing Marx, Hegel, Schopenhauer, Nietzsche, and Kant are all used to examine man’s actions.  Technological industrialization is given the lion’s share of the blame.  Even as the West cleans up its act to prevent destruction, the destruction continues.  The West now blames China and other countries for damaging the earth system.  That blame comes right back as China manufactures goods for the West.  It is still the same planet.  Moving industry from one spot to another does not make it disappear.

All in all, Defiant Earth is a difficult read.  It is much more an academic level text than a general public reading.  It does feel like a lecture like I mentioned before and certain items, phrases, and themes seem to repeat to the point I was not sure my Kindle was actually saving my place in the book.  “You knew you were wrong since the 1990s yet chose to keep destroying the earth and destroying it at an accelerated rate.”  Perhaps this is the shock we need, or more precisely the realization that we need.