“There is nothing new to be discovered in physics now, All that remains is more and more precise measurement.” 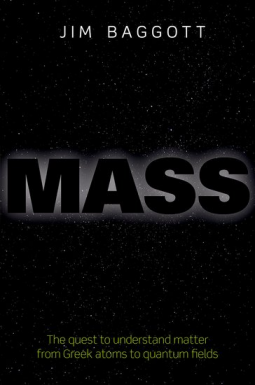 Mass: The Quest to Understand Matter from Greek Atoms to Quantum Fields by Jim Baggot is an in-depth study of the “stuff” that surrounds us. Baggot is currently a freelance science writer. A graduate of Manchester with a degree in chemistry and a PhD in physical chemistry from Oxford, he was a lecturer at the University of Reading and is the author of several books on quantum physics and reality.

Three years ago I read Baggott’s Farewell to Reality which I found to be very informative and written at a level where the information was understandable and yet not dumbed down. The same formula is followed in Mass. There is a rising level of knowledge needed as this book progresses. Considering the timeline this book covers most of the information can be grasped by those with a moderate science background.

The idea of mass, matter, has evolved over the ages. It is all around us and yet we know so little about what it actually is. It is more than fire, earth, air, and water. The idea that atoms were indivisible has since passed and even the concept they are the smallest particles with it. Even the particles that make up the nucleus of atoms are made up of other particles. All that is solid around us is mostly empty space and empty space we find isn’t really empty.

Baggot starts off with the ancient Greeks and their developing understanding of the world around them.  He works to put the reader in the mindset of the historical philosophers and scientists.  We have the advantage of technology and a long history of experimentation.  The Greeks were innovative and as wrong as they appear today, at the time it was advanced thinking.

Baggot takes the reader through the Newtonian period and into Einstein without much math or formulas.  The history of discovery and ensuing problems, from the ancients to the present, is very well done.  Determining what exactly mass is a long and developing problem.  Science strives to find elegance and simplicity — f=m*a or e=mc^2. Still, Einstien simplified complex problems with thought experiments and Feynman use the diagrams that bear his name.  Einstein also initially believed in a static universe and created a cosmological constant to balance his equations.  The problem was the universe is not static, but his cosmological constant did help in the search for dark matter and energy which make up most of the universe. The harder we look the more we find. Schrodinger had his cat, but string theory is stuck with complex math and many dimensions.  The study of mass has moved from observation to a point where observation interferes with the experiment.  The more we discover. The more we have to learn and the more complex the science and math gets.

Mass is an interesting history and science book.  It shows that every time we think we understand what makes up the universe we find another hidden layer and a more complex explanation.  Baggot does not show us the next layer of physics to be discovered nor does he add to the explanation of the universe.  He does do a very good job of explaining how we got to where we are.

3 responses to “Book Review — Mass: The Quest to Understand Matter from Greek Atoms to Quantum Fields”