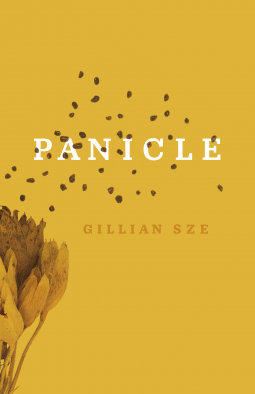 Panicle by Gillian Sze is the author’s ninth poetry collection. Her work includes Peeling Rambutan (Gaspereau Press, 2014) and Redrafting Winter (BuschekBooks, 2015), both of which were finalists for the QWF A.M. Klein Prize for Poetry. Sze’s work has appeared in a number of literary journals and has received awards such as the University of Winnipeg Writers’ Circle Prize and the 2011 3Macs carte blanche Prize.

A panicle is defined as any loose, diversely branching flower cluster. Oats are a common example of this type of plant. Sze refers to lupines, a panicle, in her collection. Lupines are typically violet or blue which brings in another theme in the collection. Blue is the color of the sky but in this collection, it is also the color of water. Water is presented throughout the collection as rain, ice, hail, the water cycle, a flooded ditch, stagnant water in a paper cup with a daisy, ripples in the cove, and a waterfall.

In the first section, there are five poems with the partial title Sound. “Sound No. 1”, one of my favorite poems in the collection, carries the theme of blue to a different sense:

When you push through the water, past the gawping fish that realize
you don’t belong, everything resounds with your final cause. It
sounds blue and it comes from all directions.

The poems in the collection are narrative in nature and most are inspired by a quote, a poet, or piece of art. Some poems are descriptions of scenes. There are a series of tableau poems and a series called “Seven Takes.” The third “take” provides a nice ananolgy, in parable form, of what we are destined to become in life. Much like a panicle plant with many flowers branching off the same stalk life has many branches that we can choose from yet all are interconnected through the main stalk.

The third section is a tribute to a Roland Giguère work with supporting artwork. The collection ends with the title poem “Panicle”. Here is a convergence of the complete work. Much like the climax of a story, we reach the high point of the poet’s work. The themes and ideas throughout the collection are brought together in an artful closing. Sze gives the reader a collection filled with imagery and imagination and invites the reader to look deeper. An inspired and inspiring collection.

One response to “Poetry Review — Panicle”