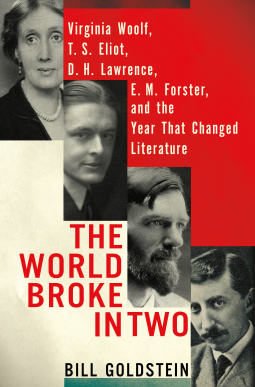 The World Broke in Two: Virginia Woolf, T. S. Eliot, D. H. Lawrence, E. M. Forster and the Year that Changed Literature by Bill Goldstein is the interconnected story of four of the twentieth century’s greatest writers and the influence of two of their peers. Goldstein is a multifaceted littérateur and holds a Ph.D. in English from the CUNY Graduate Center, with a specialization in early modern English literature. Goldstein has also worked both in publishing and in journalism, most notably as a senior editor at Scribner, and then at the New York Times, where he was the founding editor of the nytimes.com Books section.

The premise of the book is stated early on — “The World Broke in Two tells the story of 1922 by focusing on four legendary writers: Virginia Woolf, T. S. Eliot, E. M. Forster, and D. H. Lawrence, who were all similarly and serendipitously moved during that remarkable year to invent the language of the future.” The title itself comes from a 1936 Willa Cather essay “The world broke in two in 1922 or thereabouts.” She was referring to the publication of Joyce’s Ulysses and the publication of The Waste Land.  H. L. Mencken referred to 1922 as the end of the Christian Era and as year 1 p.s. U. — Year 1 post scriptum Ulysses.

In literature, it was a time of great change.  The increased momentum of change may very well have been the Great War.  Its influence can be seen in Eliot’s The Waste Land and even in Virginia Woolf’s story that became book “Mrs. Dalloway of Broad Street”.  A backfire of a car startles people back to memories of war.  Mrs. Dalloway even makes notice of the eleven o’clock hour in her shopping, the hour the war ended.  That shock which rocked Europe from 1914 through 1918 produced the change which blossomed four years later.

Goldstein writes a web of connection between the main writers.  Chapters center around individual writers but form connections between each and all.  Included in the connections are Ezra Pound, publishers, and the driving influence of change, James Joyce.  The writers all had their problems;  Woolf with physical and mental health.  Eliot with nervous breakdowns and an ill wife.  Forster with sexuality and perhaps too strong of an attachment to his mother.  Lawrence traveled the world to be left alone.  He was a letter writer, not a mingler or conversationalist.  He also faced censorship troubles and at least one psychiatrist who read his earlier work deemed him a homosexual who overcompensated for this by his erotic works.  Despite difficulties 1922 saw the publication and beginnings of  Jacob’s Room and Mrs. Dalloway (Woolf), The Waste Land (Eliot), Aaron’s Rod and Kangaroo (Lawrence),  Alexandria: A History and Guide and A Passage to India (Forster).

Several other themes run through the book.  Censorship of Joyce and Lawrence particularly in the United States and the battle fought by the New York Society for the Suppression of Vice. The early twentieth century allowed for easy suppression of literature.  Groups like the New York Society had enough clout to get works banned by their say so and possessed some extra-legal powers to confiscate books.  Their standing was much like the religious police currently in several Islamic countries. Lawrence’s publisher, Seltzer fought back and won the battle for Lawrence’s Women in Love in 1922.  This opened the way and the ruling that just because there was an obscene part of the book did not mean the entire book could be banned as a result.  This, however, was not the end of censorship in the US or even of Seltzer, he eventually went bankrupt fighting for his right to publish.

Reaction to the other writer’s work is also interesting.  Woolf disliked Ulysses but was influenced nonetheless.  She stated she never read The Waste Land but loved the reading of it by Eliot.  Lawrence could not read Ulysses.  Eliot wrote of Joyce in The Dial ‘the most important expression which the present age has found’.  Forster like Woolf preferred Proust to Ulysses.  Regardless of their individual opinions, all were influenced by that work.

The World Broke in Two presents the change in literature with authors who were struggling in their own ways do provide something new. Jacob’s Room was a clear departure from Day and Night for Woolf who turned forty in 1922.  She would find the connection she searched for once Mrs. Dalloway on Broad Street became a novel. Woolf saw connection as an important part of literature and, in a way, provides a connection between the other authors. The Waste Land was a clear departure from Eliot’s earlier work, “The Love Song of J. Alfred Prufrock” five years earlier.   Lawrence continues his writing while doing his best to isolate himself from people. Forster, pushing fifty, struggles to write his India story. Forster would finish his India book, A Passage to India, a few years later, a full fourteen years after publishing Howards End.

Goldstein weaves history, literature, and psychology together in a spectacular read.  His narrative moves smoothly between the authors and the topics.  Woolf who was constantly flustered with the lack of connectivity in Jacob’s Room and The Waste Land would be happy at the connectivity Goldstein establishes between the writers and the development of the literary modernism.  Coming into this book I was familiar with Eliot, but more so with Woolf. However, introducing the other authors helped complete the picture of the modernist movement in literature.  A very important read concerning the development of twentieth-century literature.  The best nonfiction that I have read this year.