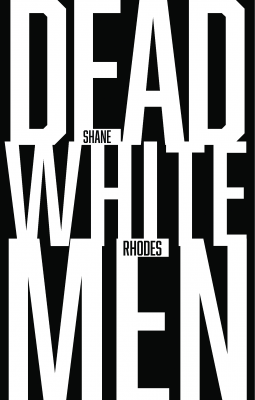 Dead White Men by Shane Rhodes is the author’s sixth collection of poetry. Rhodes is a two-time winner of the Archibald Lampman Award for poetry. In 2008, when his work The Bindery won the award, Rhodes turned over half of the $1,500 prize money to the Wabano Centre for Aboriginal Health, a First Nations health center. At the time the award was named the Lampman-Scott Award, honoring both Archibald Lampman and Duncan Campbell Scott, and Rhodes felt that Scott’s legacy as a civil servant who was responsible for some of Canada’s more controversial policy legacy on First Nations issues overshadowed his work as a pioneer of Canadian poetry.

History, oppression, conquest, and invasion tied together with poetry presents a powerful message. Recreating explorers journals in poetic form Rhodes tells the story of the exploration and conquest of North America and, in the second half, of the South Pacific. The reading sounds and looks authentic to include the medial or long “s.” The explorers are not all well known. I had to look several up since most were in modern Canada. Martin Frobisher who made three attempts at finding the Northwest Passage is documented. Better known explorer Henry Hudson is also included.

Rhodes does offer a bit of a reprieve for dead white men by including scientists like Luigi Galvani (animal electricity), Boyle (the first modern Chemist), William Gilbert (magnetism), Galileo, Mercator (maps). He follows up with Spain’s prize of the New World, Gold.

The second part of the book, which could also be the first part since it is printed upside down and backward. Covers the South Pacific and includes a running theme of Venus to include the organized observing of the transit of Venus in 1769 from the Island of Tahiti. Science meets with the seamen of the empire. Trading iron nails for sex with the native women. So many nails were missing from the ships that their seaworthiness was in question.

Rhodes opens each section with sideways text and uses the double page for some text. The upside down text of the second half was difficult on an e-reader. Also, the artwork looks like it needs the double page of a book rather than a single page display of a Kindle. Although I rarely say this, get the print version of this book. You’ll appreciate it more. Very much well worth the read.  Enjoyable as art and poetry but disturbing in historical context.  Very well done.