Book Review — How Different It Was: Canadians at the Time of Confederation 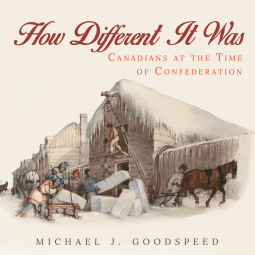 How Different It Was: Canadians at the Time of Confederation by Michael J. Goodspeed is a snapshot of history. Goodspeed is a historian and novelist. In addition to a successful writing career, he has been an infantry officer and a manager in high-tech firms. He has lived and worked across Canada and on several continents.

I am not Canadain but grew up eighty miles away from the border. I have always found that I knew more about Mexican history and Mexican leaders than I did about the Canadian counterparts. Growing up, Canada was that quiet neighbor. We heard more about Margret Trudeau than Pierre Trudeau. Canada was a place they spoke English, had better beer, and better fishing. I have learned a lot about Canada since the 1970s especially its coming into its own on the world stage after World War I.  Still, I knew little of how Canada became an independent nation.

Reading British accounts of the American Revolution, Britain had little claim by settlement in Canada. After the French Indian Wars, Britain was left with a large amount of land and a small population that was mostly French. The American Revolution provided settlers in the form of those loyal to the crown moving north.  Much of the immigration to Canada was from the United States up until the War of 1812.  President Polk and his 54′ 40″ campaign over the Oregon Territory was settled peacefully but lead to distrust along the border.

Canada in the 1860s is interesting in that it paralleled American history in some ways and was vastly different in others. Proximity to America did not create a carbon copy of its neighbor. Railroads did join both countries, but Canadians considered themselves British and Americans considered themselves separated. In general, Canada was much more tolerant of race and native peoples than most countries founded in expanding empires. Goodspeed goes into detail of the development of both urban and rural areas contrasting the differences between regions. Big city life had its problems like equine traffic jams. Dredging and canal work moved the center of trade in Quebec from Quebec City to Montreal.

Goodspeed shows the consolidation of territories and people to make what is today Canada. The process that started with four provinces in 1867 became recognizable as modern Canada by 1905 (Newfoundland and Nunavut joining later).  Canada during the confederation period is more of a collection of histories than a single history.  As difficult as growing into a new nation can be, Canda managed to join with surprisingly less violence than other countries in the West.  An interesting history well worth reading.