Book Review — My Lai: Vietnam, 1968, and the Descent into Darkness 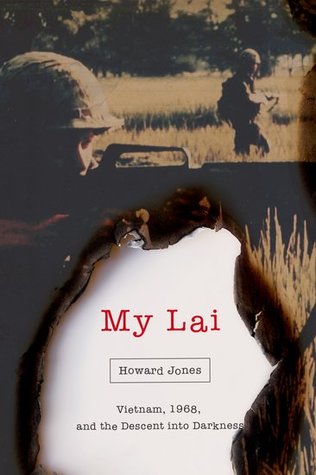 My Lai: Vietnam, 1968, and the Descent into Darkness by Howard Jones is a study of one of the darkest moments in American military history.  Jones is University Research Professor of History Emeritus at the University of Alabama, where he chaired the Department of History for eight years and received the John F. Burnum Distinguished Faculty Award and the Blackmon-Moody Outstanding Professor Award.

Having served in the Marines we were taught the standards of war and the rules of engagement. We had leadership that was experienced and committed to standards. The Vietnam War was different. Officer’s were pulled from the ranks. The ranks were drafted into service. Those in Vietnam simply wanted to do their twelve months and get out alive. Most didn’t rush in and volunteer to fight. Some did, though, and that combination between aggressive and those who just wanted to make it out alive created a dangerous situation. The aggressive leaders wanted a body high body count. Those wanting to live saw it advantageous to shoot first and ask questions later. It was difficult to tell friend from foe so viewing everyone as the enemy was a survival tactic. Soon any native was a “gook.” One of my colleague’s father was a helicopter door gunner in the war. He remembers asking his father how could you shoot people like that. His father said, “They weren’t people.”

There has always been a dehumanizing of the enemy. In World War I, it was the Huns. In World War II it was the Japs and later it was the Commies. Vietnam took it extremes. The hidden enemy was frustrating. Not being able to retaliate against an enemy killing your friends was a heavy burden on many fighting the war. There was a lashing out at what is to be known as My Lai massacre.

Unclear orders, incompetent leadership (Calley was called Lt Shithead by his company commander), built up aggression and contributed to the atrocity. Through the chain of command, it came down to the people remaining in the village were enemy combatants. At the end, 347 Vietnamese were dead this included old men, women, and children. There were no American deaths and ly three weapons were captured. Although, there was much firing and artillery fire it was coming from the American forces. My Lai was not armed. The 48th Battalion of the National Liberation Front (Viet Cong) was reported to be in My Lai; they were not. Calley’s Charlie Company was responsible for much of the massacre. What makes My Lai so horrible is more than the killing of civilians of all ages, is the rape at gunpoint that took place. This was not a military operation. This is something invading hoards did in the middle ages.

Howard goes into graphic detail of the search and destroy mission and the atrocities committed. He goes into the cover up, trial, and eventual freedom for Lt Calley. This book has to be one of the most disturbing books I have read and ranks with WWII atrocities by the Axis powers. The Abu Ghraib torture incident in Iraq caused quite a stir in 2003. This was a drop in a bucket compared to My Lai and the cover up. Howard does include those who refused orders to kill civilians and those who worked to stop the massacre. A frightful history and a very dark chapter in the history of the US military.

One response to “Book Review — My Lai: Vietnam, 1968, and the Descent into Darkness”