Poetry Review — The Poetry of Impermanence, Mindfulness, and Joy 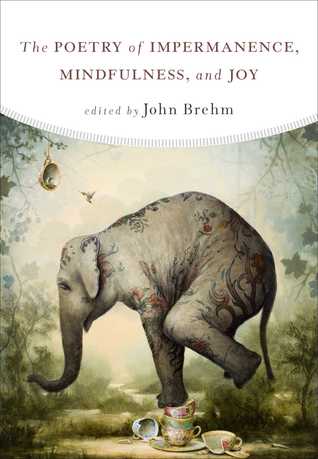 The Poetry of Impermanence, Mindfulness, and Joy edited by John Brehm is a collection of Eastern and Western poets. Brehm was educated at the University of Nebraska and Cornell University. He is the author of Sea of Faith, which won the 2004 Brittingham Prize, and Help Is on the Way (2012), winner of the Four Lakes Prize from the University of Wisconsin Press.

What seems to be a simple book of poetry is really profound in its purpose. The idea of mindful reading is explained in the appendix acts as a guide to get deeper into the poetry. The poetry presented in each of the three sections, Impermanence, Mindfulness, and Joy, are from a wide range of poets and styles. Poems from ancient Chinese and Japanese poets are present as well as modern poets from Poland, England, and the United States. A reader may be surprised to find two poems from Philip Larkin, a poet who seems very out of place with his glum outlook.

Impermanence poems look at the world and ourselves and how eventually everything degrades. Ryokan seeks a timeless truth and discovers “the flower’s glory is just another form of dust.” Our lives also degrade and end and explained in Larkin’s Ambulances. Anna Kamienska examines life and how life flies by us:

and closed with a word
like a lake with ice
winter passed snows melted
the suns appeared and saw
after the winter
that scar on the earth
your grave.

Mindfulness tells of the world around us that we often miss or the beauty of the most mundane things. Yosa Buson contributes:

Coolness —
the sound of the bell
as it leaves the bell

These are poems intended to make the reader aware of the things and life around him that he rarely sees or notices. Frank O’Hara in a “Step Away from Them” is a recording of his experience during a lunch time walk. There are things that we pay no mind to like the Coke in a construction worker’s hands, stray cats, and people and posters on the street. This is perhaps the most enlightening section of the collection. We are so caught up in our own life, or now our phones, we do not notice what is right in front of us.

Joy is self-explanatory. There is the joy in watching children imitate cranes or sitting beneath a tree or under the moon. Whitman tells of a lecture by a learned astronomer who talks with columns of figures and diagrams. Whitman, discouraged by this, walks out and takes in the night sky in all its visual wonder and enjoys it in silence. Fernando Pessoa writes:

On those for whom happiness
Is the sun, night will fall.
But those who hope for nothing
Are glad for whatever comes.

The Poetry of Impermanence is a thought-provoking collection designed to make the reader think and in many instances simplify and slow down. The appendix also includes short biographies of all the poets along with a source guide for all the poems used in the collection. The collection uses many sources to show that the Buddhist truths, like many things, are all around us if we take the time to notice. A well-done selection with poems from many different sources converging on three simple points.

One response to “Poetry Review — The Poetry of Impermanence, Mindfulness, and Joy”