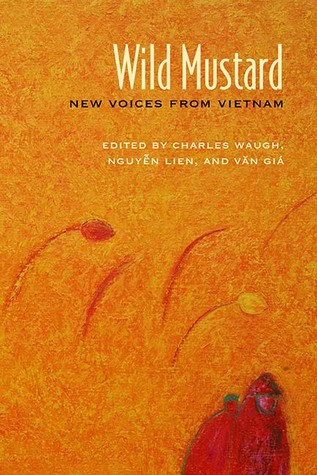 Wild Mustard: New Voices from Vietnam edited by Charles Waugh and translated by Nguyen Lien and Van Gia are a collection of short stories about Vietnam. Waugh is an associate professor of English at Utah State University. In 2012, he received a fellowship from the National Endowment for the Arts for his work in literary translation. Lien was a writer, translator, scholar, and teacher who championed world literature in translation for nearly fifty years. He translated many international works of literature into Vietnamese. Gia is the dean of the Faculty of Creative Writing at the University of Culture in Hanoi. A professional journalist as well as a beloved teacher, he is a prolific author of literary reviews and nonfiction essays.

Vietnam is a strange land for most Americans. Although the American involvement in the war ended nearly half a century ago, we still seem bitter and likewise ignorant of the country. American’s learn about Vietnam from Hollywood — Full Metal Jacket and Hamburger Hill. We see documentaries of impoverished peasants pushing bicycles loaded with supplies down the Ho Chi Minh Trail. We see a country bombed into the Stone Age. For those of us alive when the war was fought we remember gold star banners in windows. We also remember the older kids on the street going away. We remember that we were fighting communism, the Domino Theory, and trying to save a people.

What the Vietnamese remember is fighting for freedom. Ho Chi Minh was at Versailles after WWI with a petition for Vietnamese independence from France. He wanted a liberal democracy and was completely ignored. They wanted freedom from the French, then fell to the Japanese, and back to the French again after WWII. When France left the country was divided and America took up for the French. When fighting for independence a country looks for who will help and accepts that help as a lesser evil. The Soviets were willing to help.

What Wild Mustard brings about is a personal history of Vietnam by younger writers. Although it is fiction, it is meant to show present day Vietnam from the perspective of the people living there now. There is a mixture of old and new in the stories and little of it has to do with communism. There are the old traditions and the newly liberalized economy. Ancestor worship and respect for grandparents meets the want to be yuppie youth. The middle-aged are proud to own their means to make a living — like a truck to haul produce to the various markets for farmers. Or even owning land after collectivization fell creates a new sense of worth. Vietnam shows itself ready to be the next Pacific tiger. Rather than closing up like North Korea, Vietnam has opened and grown. The stories are not like the stories from Soviet authors about gulags, cabbage soups, or the secret police. There is vibrant color in Vietnam compared to the gray of the Soviet Union. That is not to say that everything is wonderful in Vietnam, but there is real hope for many. A great collection of enlightening stories by the youth of Vietnam