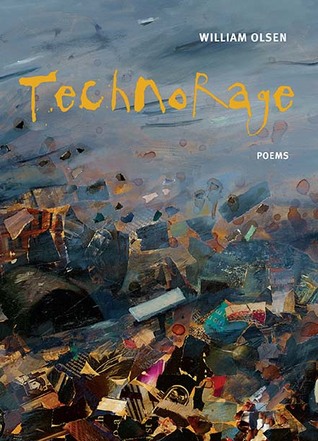 TechnoRage: Poems by William Olsen is the poet’s fifth collection of poetry. Olsen is the recipient of The Nation/Discovery Award, as well as fellowships from the Guggenheim Foundation and the National Endowment for the Arts. He teaches at Western Michigan University and Vermont College.

Although I hate to borrow from the book’s own description or press release, but “It’s intensely lyrical poems remind us of our humanity, spinning free-ranging poetic conversations that question the ways of the world. In the age of the wide but often shallow lens of our new technology” is an excellent summation of the collection. For example, “Out of the Vortex” opens with:

Gust smattered gobs of snow glommed to spruce
limbs
shingled white, then, through snow fume, a hint
of living green,
the ecstatic without the static, without confines.

Olsen writes interestingly and imaginatively of Francis Bacon’s painting “Figure with Meat” in “Damnation” and reminds the reader the figure lives because he ate death. Olsen also carries a fondness for herons as well as snow. The heron in mythology is a messenger of the gods and in other mythology, the sun. Olsen’s herons settle at night and fly overhead in the day. He quotes Schweitzer in the title poem — “human happiness will destroy the world.” He continues with child laborers and the hunt for Luddites. Man created the machine in his own image although the machine’s soul is something unknown. Machines now create machines and we watch Transformers in a climate controlled environment… environment being used sentimentally. We create banks, server farms, and wars “So we can despise all of creation.” In the second part of the collection, it is lead off with “Under a Rainbow.” Rather than an Emerald City we see rust, rust color, rust rusting, and “corrosive loss.”

Olsen reveals the origin of his middle name the poem “My Middle Name.” Curtis as in that great American Curtis LeMay (his mother used to watch LeMay play softball in the 1950s): “We’ll bomb them back into the Stone Age,”  peace through mutually assured destruction and visions of Dr. Strangelove. “Early Murder” is a rather lengthy ode to crows and very well done. The fourth and final section contains my favorite poem in the collection, “A Natural History of Silence.” Silence “must be frightened, because it knows the moment it makes itself heard it no longer exists.

An excellent collection of poetry. Although the title had me expecting an angry account of man’s mistreatment of the earth, it has many sides to include leaves and some animal species along with the aforementioned snow and herons. There is a balance between both aspects. Thought provoking writing and poetic beauty in a collection that can be read over and again without losing its brilliance.