Book Review — Is Canada Even Real?: How a Nation Built on Hobos, Beavers, Weirdos, and Hip Hop Convinced the World to Beliebe 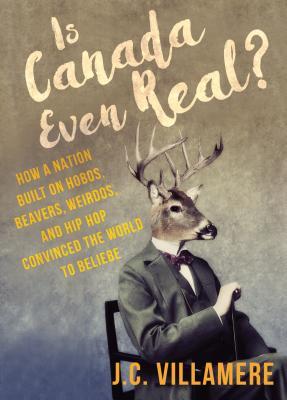 Is Canada Even Real?: How a Nation Built on Hobos, Beavers, Weirdos, and Hip Hop Convinced the World to Beliebe by J.C. Villamere is a look at that other side of Canadian history that usually doesn’t make it into the history books. Villamere knew how to drive a Ski-Doo by age eight and her body is 90 percent maple syrup. She is the most Canadian woman in the world. Villamere writes to remind you that your country is wise and weird and you‘re in charge of keeping it that way. She is the publisher of Villamere: The Lowbrow Magazine of High-End Can Lit. She lives in Hamilton.

Canada is a country with a rich history but little of it gets south of the border. The history presented here is more of a cultural history. The Littlest Hobo a series that ran six years is a cross between Lassie and Scooby-Do. It was the 1980s videotaped show with a dog helps a person plot to secret agent dog. Although sounding a bit corny it had a wide range of guest stars from Abe Vigoda to Mike Myers. This ties into the real hobos of Canada and the rise of yodeling music…aka Canadian country music and the rise of the original singing cowboy (not the one who sang about Rudolf). Music continues to be a theme covering Canadian pop music to the rise of Degrassi star turned rapper Drake and his being genuine in his music and not trying to be a gangster rapper without the cred like Vanilla Ice and Hammer.

Politics and political characters play a role in the book from McDonald to Trudeau and his hair (Bieber’s hair has a tie-in to). It seems Reagan was not the only modern world leader with ties to the supernatural. Canada’s Mackenzie King followed and ask to be communicated with after he died; CTV complied. Politics gives way to mascots including Peter Puck and Quebec’s Bonhomme who made it to the cover of McLeans.

Villamere takes the reader on an interesting tour of things Canadian and pop culture. Each section is followed by a quiz to test your knowledge of related subjects. Not being Canadian myself, I could follow along quite well with the stories told. Villamere does an excellent job explaining the background of the material she covers. The quizzes at the end of the chapter are not completely covered in the text, but the answers are well explained. The book flows well with the chapters leading into the next smoothly. A well done, informative and fun book on our neighbors to the north.