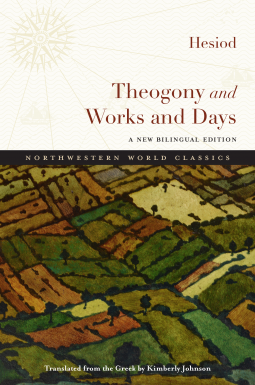 Theogony and Works and Days: A New Bilingual Edition by Hesiod is a collection of ancient Greek poetry.  Hesiod wrote in the late 8th Century BC.  His work is preserved in dactyl hexameter and in over fifty sources exist.  The work as published by Northwestern University Press is printed in both Greek and English on opposite pages.  Kimberly Johnson is responsible for the translation. Johnson is a professor in the English department at Brigham Young University in Provo, Utah.

Johnson translates the Greek and provides the introductions.  The Works are translated in a way to preserve the original intent as well as to keep the flow of words in poetic form. Reading Theogony one easily catches the rhythm of the words and lines and falls into the story.  It reads as an epic poem much like the later Beowulf and Paradise Lost.  Zeus throws lightning bolts without mercy instead of angels heaving mountains.  There is a grand scale to it.  For those not familiar with Greek mythology, the Kindle Edition will allow the reader to immediately identify gods, demigods, and titans with Wikipedia.  I used that feature throughout the reading.

Johnson also explains why a large part of Theogony is devoted to the minor god Hekate.  She was a bridge between the Titans and the Olympians.  She was the last goddess born in the Titan generation but honored above all by Zeus.  There is plenty of action in the poem as well as a bit of the god’s family tree. The translation brings the poem to life.

Works and Days is a mix topics.  There is Hesiod’s dispute with his brother over inherited property.  The rest is a mix of advice — Never accept a gift from Zeus.  Rules — A man must never bathe in a woman’s bath water.  Agricultural advice — how to use the constellations to determine planting and harvesting.  Hesiod also offers advice on never planting on the thirteenth day of a waxing moon.  This sounds a bit mystical, but recalling Hesiod’s fondness of Hekate, the goddess of magic, among other things, it makes sense.  Although it is not known if Hesiod took a wife he does offer advice on the subject:

When you’ve come to ripeness, bring home a wife —
Neither far shy of thirty nor aged too far past:
The sweet spot for your marrying.

Johnson translates an exciting bit of history, poetry, and mythology that seems rather rare today. The blending of several aspects of Greek culture in one book makes it an excellent study for those who enjoy poetry, history, or mythology. A great read and a great bit of education.