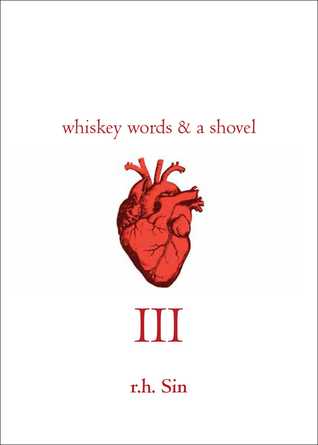 Whiskey Words & a Shovel III by r.h. Sin is the final collection in series. Sin took the world by surprise. Little in the way of biography and a few words on each page. His talent is deconstructing the complexities of life and especially relationships into a few words. Much like pulling a meaningful quote out of a song, that little bit of the whole that ties everything together. Sin’s poems have now gotten longer and although the pages are small the words fill more than a single page. The work is as well done as in the first two collections and is no way a collection of what was left over.

Sin’s first Whiskey Words & and Shovel is still in demand. I bought the first collection, after reviewing the second, for $17. Now the book is going for $150. I have received emails from people asking if I am willing to sell my copy for a reasonable price; I passed it on already. The writing is a hit for those in their twenties where the writing is most relevant. The themes are the same though out the collections — Love, relationships, treating a woman right, feminism, and patience. The poet also spends much time on paying tribute to a woman, Samantha. His writing to her is much like Petrarch’s writing of Laura. Longer than the earlier collections with lengthier poems as well as his signature short poems, Sin closes the trilogy on a high note.