Book Review — Vimy: The Battle and the Legend 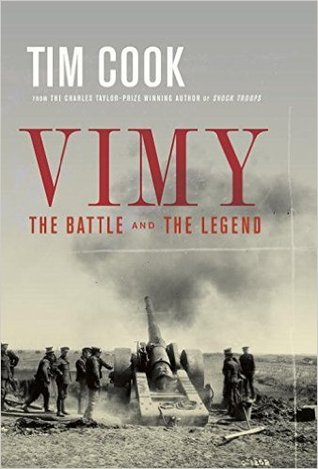 Vimy: The Battle and the Legend by Tim Cook is the history of the significant battle and what it meant for Canada on the world stage. Cook is a Canadian military historian and author. A First World War historian at the Canadian War Museum and a part-time history professor at Carleton University, he has also published several books about the military history of Canada during World War I.

Every nation or organization, for that matter, has its turning point of when it became its own entity.  For America, it’s 1776.  For the US Marines, it was Belleau Wood in World War I.  The thing is that certain events become associated with countries and groups even if there were other more important things going on.  1776 means little in comparison to the Treaty of Paris 1783 which recognized the United States as an independent country.  The Marines at Belleau Wood had help which is usually not mentioned.  For Canada, which gained independence, or self-rule,  150 years ago without much international fanfare, Vimy was the place where Canada was seen as separate from Britain. Vimy wasn’t the first victory for the Canadian Corps nor its most important, nor did it end the war. Nonetheless, it is the battle that is remembered. In US perspective, it is Canada’s raising the flag on Iwo Jima.

Germany was a strong adversary and once the war settled into trenches the Germans were difficult to beat.  The German military was the best trained and most skillful land force in the war.  It caused two casualties for everyone it took.  The drain on France was very noticeable.  To beat the Germans the allies either needed more people to lose through attrition or a better-trained fighting force.  Canada provided both.  The Canadian Corps had the reputation of being wilderness men — the roughest of toughest.  Canada also had the advantage of being able to train and look at the previous battles with a fresh set of eyes.  The Allies were putting bodies in the field to fill holes in the line without much training.  They suffered nearly 87,000 casualties at the Battle of the Marne and 620,000 casualties at the Battle of the Somme. Military training became more of an on the job training.

Canada entered the war on the condition that it would be the Canadian Corps and not fillers for the British units.  In addition to adding extra trained bodies to the war. Canada, at Vimy, did something rarely, if at all, seen in the war.  It out-soldiered the Germans. It used information gained from all level of troops and planned and executed a military assault that beat the German defenses and planning.  It was something that worried the Germans.  It was not just a war of attrition as previously fought but an active and maneuvering war that had not been seen since the opening days.  The Germans were being outmatched on skill, not just numbers.  The Canadian Corps would be used in later battles as shock troops by the British.  Vimy became the proving grounds for the newly created Dominion of Canada.

Cook provides a history of the Battle of Vimy with first-hand accounts and even a few “last letters home.”   The work is well researched and documented.  It is an important work not only for Canada but also those of us to the south.  Canada’s contributions to the war, highlighted by Vimy, brought Canada to the world stage as its own nation.  After the war, Canada demanded and received its own chair at the Treaty of Versailles.  It had fought proudly side by side with the Allies and compared to the US and Britain sacrificed proportionally more in human lives.  Vimy is the symbolic beginning of an independent Canada.