Book Review — Equipment for Living: On Poetry and Pop Music 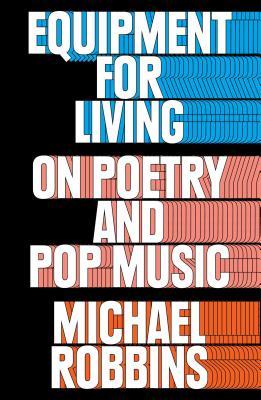 Equipment for Living: On Poetry and Pop Music by Michael Robbins is a look and comparison of pop music and poetry.  Robbins is the author of Alien vs. Predator (Penguin, 2012) and The Second Sex (Penguin, 2014). His poems have appeared in the New Yorker, Poetry, Harper’s, Boston Review, and elsewhere; his critical work in Harper’s, London Review of Books, The New York Observer, the Chicago Tribune, Spin, and several other publications. He earned his Ph.D. in English from the University of Chicago and teaches creative writing at Montclair State University.

Growing up we all looked at music as if it held some esoteric message that was lost on anyone older.  Some of it sticks with us; some of it leaves as we get older.  I’ll still quote a Springsteen lyric but not a Van Halen one.  We simply outgrow some music and sometimes we outgrow what we read or grow into it.  I was in the Marines before I finally sat down and read those books I was supposed to read in high school.  Twenty or thirty years ago I would never have expected to have shelves with poetry, Camus, and Virginia Woolf.

Robbins looks at his own youth and his infatuation with Journey and tears it down.  The lyrics that seemed to be the heart of the music.  “Born and raised in South Detroit” was made up by Steve Perry simply because it sounded right. Does writing lyrics make one a writer in the sense of writing literature? Bob Dylan’s Nobel Prize has recently brought this to the forefront.  Are the two forms the same or different or just variations on the same. Poetry is visual.  We see the lines the stanza formation, the rhymes, and the line breaks.  We don’t see this in music.  The lyrics make up only part of the music — guitar, drums, vocalizing.  Then, too, before the printing press, poetry and stories were set to music to help memorize them.

Musically, Robbins covers a wide range of music from Taylor Swift to Death Metal and Punk to Country.  The poetry starts with my rock favorites like Rimbaud and the classics to a detailed examination of poets like Frederick Seidel who made the most rebellious rock lyrics seem tame in comparison. It challenges what we believe is acceptable.  It’s not just rock music or even men in dresses like the New York Dolls that spur on rebellion and challenge the social order.

Does writing lyrics give a writer insight to other writing? Robbins does use a bit of humor in his writing.  Patti Smith thinks the transition to being a writer is the avoidance of contractions and Neil Young… well, is Neil Young.  But that is also a two-way street.  Poetry sometimes struggles in defining itself.  Rhyming, in particular, is it a Western obsession that poetry rhyme and how does the end rhyme make it poetry?  I have wondered if Chinese or Arabic rhyme or follow iambic meter.  I do know Russian is particularly suited for feminine rhyme, but English is not.  Robbins makes the reader think.  Think about what we held true.  What we find as acceptable.  How we view art in our lives.