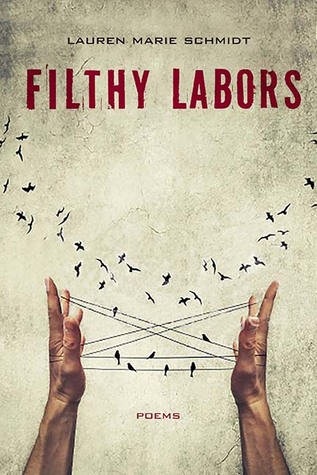 Filthy Labors: Poems by Lauren Marie Schmidt is her fourth collection of poetry. Her work has appeared in journals such as North American Review, Alaska Quarterly Review, Rattle, Nimrod, Painted Bride Quarterly, PANK, New York Quarterly, Bellevue Literary Review, The Progressive, and others. Her awards include the So to Speak Poetry Prize, the Neil Postman Prize for Metaphor, The Janet B. McCabe Prize for Poetry, and the Bellevue Literary Review’s Vilcek Prize for Poetry.

Filthy Labors centers around the work that many in society chose not to see. Schmidt spends a good deal of time describing her work at Haven House for Homeless Women and Children and her experience there. In “How We Go” a woman’s babyfather “passed away.” Passed away is how she describes the death to her child. It is so much easier to say that than describe the violent death and bloody crime scene. It is a gritty world where she works. When asked if the poet was ever pregnant, she responds she has never had a child; that’s not the question.

In “Unto Others” Schmidt quotes Mitt Romney’s 47% speech and counters it with Matthew 7:12 and Julius Caesar, act 3, scene 2 and continues with her own words. Each phrase is followed by Shakespeare’s “If any, speak.” Schmidt names the sections after the Catholic sacraments. Baptism, Penance, Holy Orders (three times), Anointing of the Sick, Confirmation, and Communion. All the poems are autobiographical or biographical dealing with family members and either an eccentric grandfather or a very progressive family. There is a little humor (or embarrassment) in her life.

The introductions to the poems are provided by writers like Whitman, August Wilson, and Paul Laurence Dunbar. Whitman is the key to her inspiration. Although naming sections after sacraments Schmidt shows that her religion, savior, is poetry. Her words and actions run much deeper than many people’s religion.