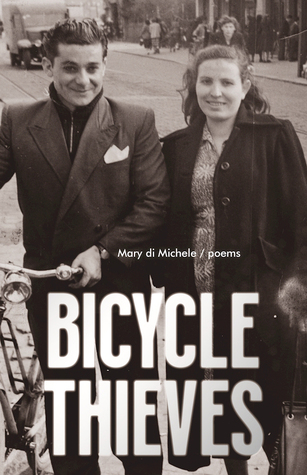 Bicycle Thieves by Mary Di Michele is a collection of poems celebrating Italian heritage in Canada. Di Michele is a poet, novelist, and member of the collaborative writing group, Yoko’s Dogs, Mary di Michele is the author of 12 books. She has won numerous awards, including the Confederation Poets Prize and the Malahat Review’s Long Poem Prize, and has appeared on shortlists for many others. Mary has been living in Montreal and teaching at Concordia University in the creative writing program for more than 25 years.

This collection play homage to Vittorio De Sica’s film of the same name and opens with a reflection back called, “Now He Drives a Taxi in Comox.” The poet reflects on her father’s as a young man and at the present. From the freezing mornings following along the horse driven milk wagon to sixty years later driving a taxi.

the city, luminous in his mind; he can see again
the copper dome of St. Joseph’s Cathedral
rising newly polished against the sky and not
blanched by snow and passing time.

St. Joseph’s Cathedral is the largest church in Canada, third largest dome in the world St. Peter’s Basilica being the first. There is a tie into Catholic churches in both Canada and Italy. We see time passing and the now oxidized green dome. Her father sees the shining dome in his memory and the promise of a new home. We see a simple taxi driver. He sees progress. To him, he has moved up from carrying milk bottles through the winter cold and snow to sitting in a warm taxi. Hope, progress, and remembrance.

Aging and time are recurring themes in this collection. In “The Montreal Book of the Dead” the poet sees her father driving in the city even though he has been dead for three years. He did not age and is still in his prime. Perhaps the dead are not dead, but simply wandering the world without seeing us. She concludes:

have retired and moved off island.
They are not gone, they have not passed on,
they are incommunicado.

There is a fear of aging. Not just turning thirty, but thirty twice over. I thought of Mick Jagger singing that he wanted to die before he got old. Now at seventy he is still jumping around the stage and is going to be a father again. Di Michele in her version offers Yukio Mishima the Japanese writer who committed ritual suicide at forty-five. She also tempts us with the thought — why must time be an arrow speeding into the future. What if time is circular?