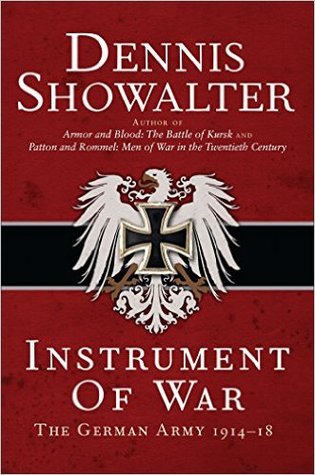 Instrument of War: The German Army 1914–18 by Dennis Showalter is a history of World War I based on the German participation. Showalter is a retired Professor of History, past President of the Society for Military History and Joint Editor of War in History specializing in comparative military history. He has written or edited two dozen books and a hundred fifty articles.

World War I was the war that could have been prevented, it, however, set the stage for the 20th century. It was the stubbornness of Austria-Hungary and their demands that brought on the violence. From all accounts, the Kaiser thought Serbia had met Austria-Hungary’s demands and planned on vacation. Franz Josef took the assassination of his despised nephew as the will of God and saw it as a way of accomplishing what he couldn’t. Unfortunately, his ministers saw things differently and moved to war. Austria-Hungary declared war on Serbia. Germany joined its ally. Russia came to the aid of its Slav allies. Germany moved against France, who was bound to aid Russia by treaty. Germany’s move through Belgium brought England to war. Much has been blamed on the entangling alliances as the cause for the war but one must remember too that the NATO alliance (and the Warsaw Pact for that matter) helped keep the peace in the Cold War. WWI was more the fault of faulty leaders than alliances meant to balance power.

World War I was history caught between pages. The advances in technology changed the world. The expansion of railroads meant that mobilization and transportation of troops and equipment could move at previously unattainable speeds. The machine gun was capable of killing on a scale never seen before. The internal combustion engine started to play a role in the military but was still too undependable to be counted on. Horses still played a major role in transportation at this time. That meant pulling animals from the farms which still used and needed them. It also meant feeding the animals. 84,000 horses used by the German’s required almost two million tons of feed a day; this came out of food that would be used by soldiers and civilians. Armies did not adapt to new technologies on the offensive. Killing charging masses of enemy troops is where the machine gun excelled. Advancing armies refused to learn their lesson.

The German army, like most powers, relied on reserve units. It differed in that their reserve units were trained and expected to hold their own in combat. Most nations reserves went to the rear and were used as fillers. The Russian army was in the worst position of the major powers. It’s rail system needed developing and the rally points for mobilization were spread across the vast country. Germany, on the other hand, exercised a near flawless mobilization and continued to be a successful force until it was not only beaten but out-soldiered at Vimy. No one expected a long war and no one was prepared to fight a drawn out war. The German army was statistically successful in creating three casualties for every two it suffered, but allied army size stood against the Germans in a war of attrition. A well-written history of Germany in World War I.