Book Review — Climate Change and the Health of Nations: Famines, Fevers, and the Fate of Populations 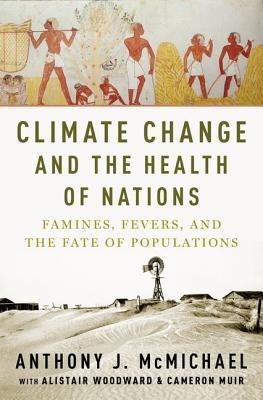 Climate Change and the Health of Nations: Famines, Fevers, and the Fate of Populations by Anthony McMichael is a historical study of the effects of climate change. McMichael, medical graduate and epidemiologist, held a national research fellowship at the Australian National University, Canberra. He was also Honorary Professor of Climate Change and Human Health at the University of Copenhagen. He was previously Professor of Epidemiology at the London School of Hygiene, Tropical Medicine (1994-2001), and President of the International Society for Environmental Epidemiology.

Despite the scientific support for climate change it still remains a political issue in the United States. Debates over natural change and man-made change in the environment to even “just the weather” abound. The current administration even stopped agencies from posting climate change information on social media. McMichael doesn’t try to convince the reader of climate change. Instead, he takes a look at the history of man on the planet. There have been obvious and undeniable, climate changes during the last half million years. McMichael examines the impacts of the historical climate changes on man. We think of ourselves as a highly adaptable creature, but we do require a “Goldilocks” zone of climate — temperature, light, and rainfall.

The history of man is the history of dealing with changes. Climate change is not necessarily the complete problem but acts as an amplifier to existing problems. In this last geological age man has dominated the planet forests have been cleared forests, created farmland and irrigation, domesticated livestock, and powered itself with coal and fossil fuels. With these elements, regional changes are examined from El Nino and volcanic eruptions and the temporary disruption to the environment. The Gulf Stream keeps the British Islands much warmer than Goose Bay, Newfoundland and Labrador which are at the same latitude. The Indian Ocean Dipole is responsible for droughts and flooding in India. Studying the effects and cycles of the natural phenomenon leads to predictions of long-term climate changes.

Climate change is real and even recognized by the Department of Defense, It issued a report that climate change lowers the world’s carrying capabilities which will result in aggressive wars. America’s electrical grid that controls almost every aspect of American lives. It is extremely vulnerable to attack. Even in our temperature controlled lives, a number of people die of heat-related deaths in modern urban cities. Imagine life without in the summer without cooling as the temperatures rise.

Over the past 70,000 years since man began to dominate the planet, we have seen the sixth extinction which is happening as fast or faster than any natural extinction in the history of the planet. The world’s climate is changing and by looking at past changes we can predict the possible effects of future changes. There is more climate change than just global warming. It also involves changes in rainfall and the frequency of droughts. There are also the effects on farmland and animal species. Climate Change and the Health of Nations is not out to prove climate change exists but to show the effects previous changes have had on civilizations. A historical reference to one of today’s most pressing problems.

2 responses to “Book Review — Climate Change and the Health of Nations: Famines, Fevers, and the Fate of Populations”