Book Review — The Case for the Corporate Death Penalty: Restoring Law and Order on Wall Street 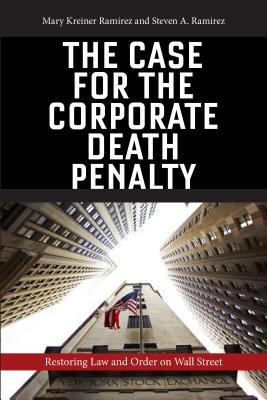 The Case for the Corporate Death Penalty: Restoring Law and Order on Wall Street by Mary Kreiner Ramirez and Steven A Ramirez is a detailed investigation of the 2008 financial meltdown. Mary Kreiner Ramirez is Professor of Law at Washburn University School of Law, where she teaches a course on White Collar Crime. She is a former prosecutor for the Department of Justice Antitrust Division, where she prosecuted white-collar criminals. She has published numerous articles addressing the challenges in combating white collar crime. Steven A. Ramirez is Professor of Law and Associate Dean at Loyola University of Chicago, where he also directs the Business and Corporate Governance Law Center.

It was pretty difficult to miss the effects of the fraud and associated crime with the housing loan crisis. “Too big to fail” was thrown around with little thought of history. Still, major financial corporations failed and went bankrupt. There was a building with the AIG logo on it that I passed every day going to work then one morning the logo was gone, overnight. Bank of America, Chase, Goldman Sachs, and Lehman Brothers were about to come crashing down dragging the US and the World economy with them.

The authors start with an introduction to other recent financial crimes. Enron’s fall and the fraud trials for Lay and Skilling brought some serious charges to trial. With the trial, evidence was actually brought to court and the justice system was used to verify the evidence. Court records are used as proof of the crimes. This lead to the disappearance of Enron and Arthur Andersen.

The 2008 financial crisis was far more criminal from the information presented. The problem, however, is the lack of criminal charges and trials. To the public, what happened to banking leaders was even more deplorable. Not only were there no charges, many executives walked away with bonuses while the foreclosure epidemic would drain over four trillion dollars from the economy. It became the financial equivalent of Stalin’s “The death of one man is a tragedy, the death of millions is a statistic.” Rob one man and it’s a crime. Rob millions and it’s a statistic… deserving a bailout.

The authors wanted to build a case based on court records but that just cannot be done. Perhaps the only thing worse than the fraud and financial crimes is the lack of prosecution. Politically connected Kenneth Lay did go to court and was found guilty. He faced up to forty-five years in prison before his death. The 2008 crisis shows the closeness of government agencies and the financial industry. People move freely taking positions in both spheres. That closeness the financial industry and the people who regulate it would not be allowed elsewhere. It boils down to money is power and power is money.

The authors take what would be dry financial information and even drier legalistic thinking and combine it into a very intriguing look at possibly the most devastating economic failures. The Case for the Corporate Death Penalty shows the reader that not only does crime pay, it pays very well at the expense of everyone else.

3 responses to “Book Review — The Case for the Corporate Death Penalty: Restoring Law and Order on Wall Street”