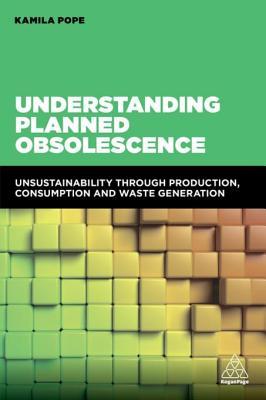 Understanding Planned Obsolescence: Unsustainability Through Production, Consumption and Waste Management by Kamila Pope is a dissertation on the current trend in economics. Pope is an Environmental Law and Bio-law lecturer, researcher, and lawyer. She has published a plethora of articles, chapters and papers covering Environmental Law, Sustainability, Planned Obsolescence and Waste Management. She holds a Master’s in Law, Environment and Political Ecology and is studying for her Ph.D. in Law, Politics, and Society.

I remember as a child watching television and the Curtis Mathes commercial would air. An old couple would say how many years, 17 I think, they had the same television. It was a statement that if you paid extra for a Curtis Mathes it would be worth it in longevity and warranty. Before, when someone bought something they bought for quality knowing that it will last longer. Quality was something that Americans took pride in. There was the thought that something older meant it was built to be durable and better than new models. Although quality and longevity were sought after features for consumers, it is not for manufacturers. Capitalism relies on growth to succeed. After WWII, America had a growing worldwide market as much of Europe was in ruins. America grew until markets became saturated and Europe and Japan recovered. The possibility of expanding the markets and growth stalled. There needed to be a new way to encourage consumption. Planned obsolescence was expanded upon as a new way to grow the market. Suddenly older wasn’t better. Newer meant better technology. A quick look at cell phones today and “new every two” shows how quickly we adapted to new features, better camera, faster data, and more storage. These are not major upgrades like the change from analog to digital. There is no real reason why an old I-Phone3 cell phone would not work today, except for software updates making them incompatible. The phone can last much longer than a few years.

Pope examines and follows human development from primitive hunter-gatherer to modern consumerism and shows the changes that have taken place. At one time, man was part of the ecosystem. Moving from place to place to stay with the food without out depleting one area. Man moved to agriculture which brought cities and consumer goods. The industrial revolution freed man from labor and created even more consumer goods. Eventually, we came to where we are today. We control the environment — Chemical fertilizers, urbanization, depleting wildlife, and large-scale removal of natural resources. There is not the effort of to conserve or buy less. We are bombarded in every form of media to buy more. It used to be just fashion being “so last year.” Now everything is heading in that direction. We are driven to consume new things even though our old things are still good. There was a time, just recently, when we could fix things. Products could be rebuilt now they are simply replaced. First, it was components that were replaced now complete systems.

Pope also gives some practical examples of how society could change to a sustainable system. Her methods would not be easy. Human greed is a powerful force to fight. Getting rich (or going into debt) and buying new things are the common mentality today. There seems to be a want that can not be quenched. Pope combines history, economics, and consumer psychology to that brings to light many things that people rarely think about. Consuming just seems part of human nature. An excellent and timely book.