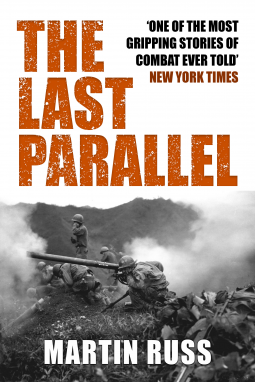 The Last Parallel by Martin Russ is a Marine’s journal of his experience in the Korean War. Russ was an American military author, Marine, and associate professor at Carnegie-Mellon University. He was born in Newark in 1931, attended St. Lawrence University in Canton, N.Y., but dropped out in his junior year to join the Marines.

The journal opens with a description of Camp Pendleton. Although written thirty years before I joined the Marines, the areas of Camp Pendleton were still familiar to me. Although things change on Camp Pendleton, they change slowly. Twenty years after I left the Marines I could still recognize my old unit from the interstate. Perhaps this opening describing the base sets the scene for how little the Marine Corps, and for that matter, individual Marines change over time. If Russ didn’t identify himself as a Marine his mannerisms and general attitude would give it away very quickly. There is that confidence in his voice and that Marine attitude about what the Marine Corps does wrong. It’s not a condescending attitude but one of acceptance and just another day in the Corps.

Russ was trained as an armorer but wanted infantry. He did everything in his power to get attached to an infantry unit during the war and eventually succeeded. Russ does not seem overly patriotic or even overly gung-ho. He is much more the average Joe who wanted to experience combat. Unlike Vietnam veterans who have written about their experience. Russ does not develop a negative attitude towards the war or the government. He details his experience as well as the equipment used and the number of Marines and their individual weapons on patrols. There seems to be a bit of dry information in all the descriptions, but Russ blends it well into his story. Perhaps it’s that I served as a Marine and his narrative seems almost conversational — nothing seemed boring or dry.

The Last Parallel presents a side of war that is not usually seen in writing. There is no political or personal ax to grind nor is there the hatred of war. Russ is neither a glory seeker nor someone looking to make sergeant major. He writes an unbiased account of his experience and in a way that is very Marine-like. There is a bit of lighthearted swagger in his writing that keeps it interesting from beginning to end. A very well written account of an American at war.