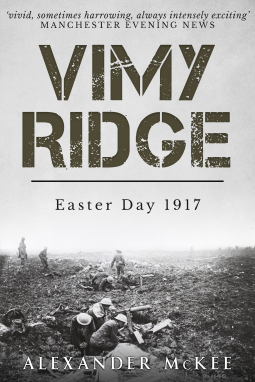 Vimy Ridge by Alexander McKee is the history of the Canadian Corps in a decisive WWI battle. McKee OBE was a British journalist, military historian, and diver who published nearly thirty books. He was a WWII veteran and veteran of the British Army on the Rhine.

Most nation’s militaries have a defining moment in WWI. For the US Marines, it was Belleau Woods. For the Canadian Army, it was Vimy Ridge. The Canadian Corps’ four divisions battled three divisions of the German Sixth Army. The battle was fought from April 9-12 of 1917 which was Easter week that year. The Canadian forces would incur almost 11,000 casualties. German casualties are not known, but 4,000 Germans were taken prisoner by the Canadian forces.

McKee does an outstanding job of combining first-hand accounts and primary source material to create and a captivating story. Much of the book reads like well-written fiction instead of a historical account. First-hand accounts of the conditions inside the trenches are vivid in detail. From the muck that could swallow a man to the rats, that shared in trenches in seemingly equal numbers as the troops the conditions were deplorable. Death surrounded trenches. Not only the threat of death from going over the top, enemy aircraft, and artillery but literal death. Bodies littered no man’s land and even became parts of the parapets… not always complete buried. One soldier reported that crawling back from a raid he found himself stopped by enemy fire. Next to him was a corpse that had been rotting. Inside the corpse were two rats eating their way into their new home.

The conditions were bad and the leadership on both sides, but especially the French were not afraid to force large numbers of troops to charge into machine gun fire. The Allies believed that they could win the war by attrition. The Canadian forces fought as a unit for the first time. They like the US Marines fought as their own and were not filler troops for the European lines. It was the first time Canadian forces fought as independent Canada and not British forces. Actions in WWI like Vimy Ridge moved Canada from a Commonwealth to a nation on the world stage. Well written and important part of history for Canada as well as the nations involved in WWI.