Well, I was in the middle of Petrarch’s lyrical poems listening to him go on and on about Laura. 366 poems about the love of his life that he never spoke a word too. The guy was completely obsessed. Today there would be a restraining order or he would be sharing a cell with John Hinckley sharing Laura and Jodie Foster stories. The guy was even jealous of the earth because when Laura died the earth would embrace her forever and he never could. That might be normal for a medieval poet but what about normal 21st-century poets? Then I picked up HST Quarterly.

HST is a quarterly poetry publication It stands for Horror, Sleaze, and Trash. So think of it for the very open minded, NC-17, cool kids market. I t does have shock value, but Ginsberg and Wilde shocked people too. This may be an opportunity to get in on future classic poetry. Things change. I mean Queen Elizabeth was at the 2012 Olympic opening ceremonies while “Pretty Vacant” was being played. For all we know, Liz and Johnny could have been high-fiving in the stands.

What to expect. If you are expecting Johnny Rotten, you will be as disappointed as someone expecting Carl Sandburg. But, if you want an original poetic experience and something to read in the shop and not have the guys laugh at you for reading poetry….this is it. The poetry is surprisingly good considering the expectations that the publication’s title offers. I have read a lot of bad poetry and this is not it.

Most of the poetry is for an adult audience although nothing too graphic. Chelsea Howard would make Petrarch gasp and inspire Dante’s second circle, but they are old guys and out of touch. JJ Campbell writes of what could only be a married couple with a long, long marriage. Angelica Fuse writes “Editors Can Be Dicks,” while the publication’s editor contributes two poems. All the poems are good and definitely worth reading. Johnny Scarlotti, however, cranks it up to eleven, twice. “Blue Whale” takes dolphin encounters to a brand new level and explains why it’s not the great white sharks that make it not safe to go back into the water. He follows up with “Toucan” a poem of seemingly new hope when seeing that there are others who are just a bad off as we are. There is that heartwarming feeling… and then there are the lines written on the side, as sort of a post script.

Overall, I did not read a poem I didn’t like which is odd in an anthology. I keep mentioning this is adult writing, the cover will give that away, but not too adult. HST does for poetry what R Crumb did for comics. 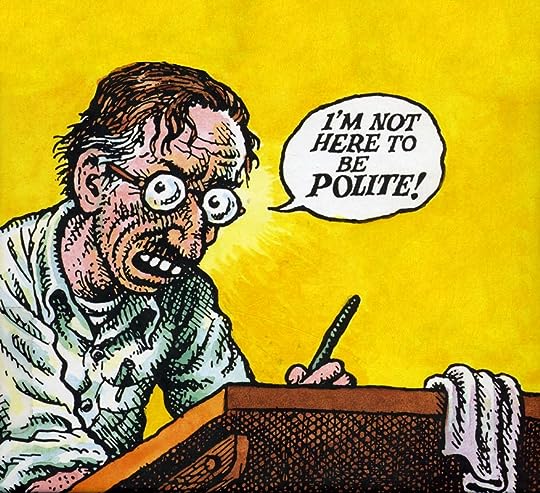 This fine publication is available at: http://www.horrorsleazetrash.com/

I can’t wait to get to the Winter issue.